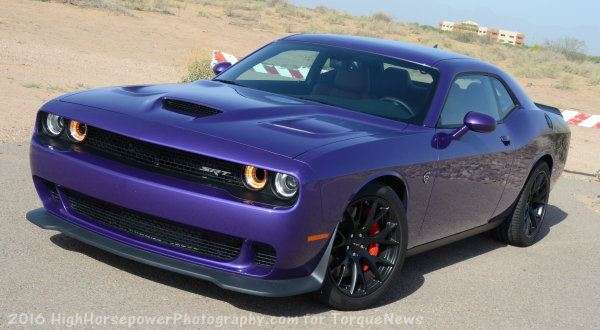 Could the Rumored 2019 Hellcat Challenger with 850hp Become a Reality?

There have been a few articles being passed around Facebook over the past few weeks insisting that the 2019 Dodge Challenger SRT Hellcat will have anywhere from 750 to 850 horsepower and while there has obviously been no word on the 2019 model year from FCA, insider information suggests that there could be a big power bump for the Hellcat Hemi in a couple of years.
Advertisement

After I was tagged into a handful of conversations on Facebook about the 2019 Dodge Challenger SRT Hellcat getting a big bump in power, I reached out to a few of my inside contacts to see what they had to say. These reports claimed future power levels of anywhere from 750 to 850 horsepower, but honestly, I was a little skeptical that FCA would spend the money to build an even more powerful Hellcat Hemi when none of the competitors have been able to offer up something to knock the Challenger and Charger from their positions atop the American performance industry. Also, the price and power levels will likely make it a fairly low take-rate vehicle so without pressure from the competition, I would be surprised to see a beefed-up Hellcat.

Much to my surprise, insiders verified that the company is considering a much more powerful Hellcat Hemi for the Dodge Challenger, although it should be noted that this beefier Hellcat is at least three years away. According to these sources, there is a very real possibility that the Dodge Challenger SRT Hellcat for 2019 or 2020 could have as much as 850 horsepower.

That sounds great, but can the company really build an 850 horsepower Challenger that can be reliably and safely driven on the street? I think so, provided that they can get through California emissions with the higher powered Hemi.

How the Hellcat Hemi Can Make 850hp
First and foremost, the key question is whether or not the 6.2L Hellcat Hemi is capable of creating 850 horsepower and based on the many, many Hellcat owners driving and racing modified cars – the answer to that question is a resounding “yes”.

I know dozens of Hellcat Challenger and Hellcat Charger owners who have modified their cars to make more power and many of them race their cars with some regularity. In baseline dyno tests, the Hellcat Hemi in the current Dodge muscle cars appears to make more than the advertised number of 707 horsepower. Realistically, the current engine makes closer to 725 horsepower and with simple modifications like a new supercharger pulley (thus more boost) and a good tune, there are owners with daily driven cars making well over 850 horsepower without any issues.

Also, of all of the guys running the lightly modified Hellcat cars with power levels in the area of 850-900 horsepower, there have been no reports of major engine failures – even in those cars that are heavily raced.

In other words, it seems that the current 6.2L Hellcat Hemi in the Dodge Charger and Dodge Challenger is very capable of making at least 850 horsepower without any problem and since the extra power can seemingly be had, reliably, with just a little more boost and a good tune – it shouldn’t be hard for the FCA engineers to tweak the current engine to make much great power levels.

Rock Solid Drivetrain Components Will Help
After questioning whether or not the Hellcat Hemi can safely and reliably make 850 horsepower in the future Dodge Challenger, the next question is whether or not the drivetrain can handle that increased power.

Once again, when I look to the popular Hellcat-oriented Facebook pages on which I am active, the guys running in the 10-second range with power levels well up into the 800+ range are not experiencing any issues outside of the driveshaft. I’ve spoken with countless owners who have added a little boost, a good tune and good, sticky tires to make enough power to run well into the mid-10s. In some cases, these guys race every weekend and in the year or more that they have been running their Hellcat Challenger or Charger very hard, there are very few reports of problems with the drivetrain. Once the driveshaft has been replaced, the automatic transmission, the manual transmission and the rear differential all seem comfortably capable of handling more than a thousand horsepower – so 850 from the factory shouldn’t be an issue.

One key issue for handling the extra power will be the tires, as the current Hellcat Challenger and Charger – while the quickest of their segments – can be a handful to launch. The first modification that many owners make is a set of sticky tires, often wider than the factory size. A Hellcat Challenger with 850 horsepower will most certainly need bigger, stickier tires to make better use of the extra power.

The biggest roadblock with an 850 horsepower Hellcat Hemi in any street legal car is going to be emission tests –specifically in states which conform to California emission regulations.

During the early development phases of the current Hellcat Hemi, the company was allegedly able to pull as much as 825 horsepower from the engine, but at the higher power levels, there were unnamed issues with passing the tougher emission laws around the US. 11 states follow California emission laws. Those states are California, Connecticut, Maine, Maryland, Massachusetts, New Hampshire, New Jersey, New York, Oregon, Rhode Island and Vermont.

If FCA wants to sell a Hellcat Challenger in the future with 850 horsepower, the toughest obstacle will likely be getting the engine to pass emission tests in those 11 states, as the components seem to be very capable of handling the extra power.

Again, all of these media outlet reports and all of my inside sources insist that this higher performance Hellcat Hemi Challenger is at least 3 years away, but it seems like there is at least a possibility that Dodge will up the ante in the modern horsepower war.

Automotive wrote on January 13, 2017 - 7:36am Permalink
Easy fix to gain another 75-100 hp by adding a larger supercharger or possibly adding twin turbos which would keep gas mileage rating in check. The twin turbo setup could be a staggered system with a 60mm as secondary and a 75mm for poer.
Fat Dan Aykroyd wrote on May 29, 2018 - 8:13pm Permalink
Uh, you obviously have no idea what your talking about... Yeah, you could get an extra 100 hp with a twin turbo or larger supercharger, but why would you spend upwards of 20k for that when you can spend 6 and get the same... Just because you know a buzz key words like "twin turbo" doesnt mean you know dick, which is obvious when you suggest putting twin turbo on a pushed hemi...