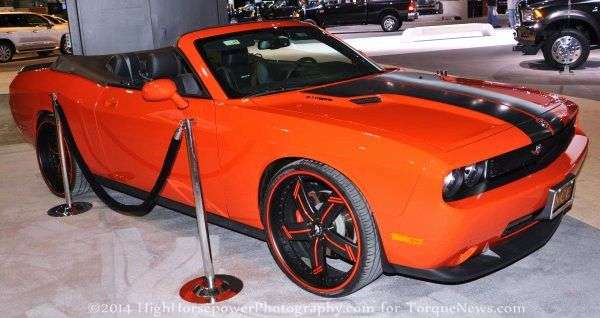 The Continued Lack of a Dodge Challenger Convertible Blows My Mind

The 2015 Dodge Challenger was designed to feature some styling cues of the 1971 Challenger and while the automaker has succeeded with this evolutionary design – there is still no convertible and the lack of a droptop version in a segment that obviously appreciates the open air freedom really blows my mind.
Advertisement

A TorqueNews reader named Anthony emailed me the other day to tell me that he loved the slight changes made to the 2015 Dodge Challenger, but he was disappointed that there was still no mention of a convertible model. I really hadn’t given it much thought due to my excitement over the new look, the new Scat Pack trimline and the addition of the 6.4L Hemi engine in the non-SRT lineup…but Mike brings up a good point. Since the modern Challenger was introduced, the lack of a convertible has encouraged fans looking for a drop top Mopar muscle car to voice their displeasure and while I hadn’t considered it, some people thought that there would finally be a modern Challenger convertible. After all, the Dodge Challenger Convertible was a popular option in the early 1970s and those models are among the most collectable classic muscle cars today.

In most cases, when an automaker chooses not to participate in a certain automotive segment, it is because they either don’t have a presence (example: Kia has no pickup trucks) or because there isn’t enough of a demand for the vehicle in question (example: hybrid muscle cars). However, the Dodge Challenger most certainly doesn’t have a presence issue and there is obviously a market for convertibles in the sports car segment. The Chevrolet Camaro, Ford Mustang, Chevrolet Corvette and Nissan 370Z are all offered in convertible trim, as are a long list of sporty models from companies ranging from Mini Cooper and Volkswagen to Lamborghini and Ferrari. For the most part, almost every sporty car sold in the United States is offered in convertible form so there is no question that the market demand exists yet the Chrysler Group – the same company who used to sell convertible versions of the Dodge Dakota midsized pickup – doesn’t offer their muscle car in convertible form.

The demand for a modern Dodge Challenger convertible is great enough that several aftermarket companies have come up with a conversion package that switches your Mopar muscle car from a coupe to a convertible, but that is expensive. The simple facts show that while younger men are the ones who seem to be the most closely associated with muscle cars, older men and women are more likely to buy brand new muscle cars. Older men and women like convertibles so on paper, there doesn’t seem to be any real reason why Dodge doesn’t build a Challenger convertible…so why doesn’t the car exist?

The problem likely comes down to the weight of a Dodge Challenger convertible. We should all keep in mind that the Challenger is a bigger, heavier car than either the Ford Mustang or Chevrolet Camaro. After all, the Challenger is based on the same platform as the Dodge Charger and Chrysler 300 sedans so while this affords Challenger owners more functional seating space, it also makes the Challenger a heavy vehicle as sports cars go. For example, the 2014 Dodge Challenger R/T has a curb weight of 4,082lbs while the 2014 Ford Mustang GT weighs only 3,618lbs so when comparing the “standard” V8 models (not including the GT500 or SRT8), the Challenger coupe is 464 pounds heavier than the Mustang. The 2014 Mustang GT Convertible weighs 3,735 so the addition of the drop top features and necessary chassis reinforcements add around 117 pounds to the Mustang. Adding 117 pounds to the 2014 Challenger R/T would bring the curb weight up over 4,200 pounds and that is one heavy sports car – one that would have a power to weight ratio of roughly 11.2 pounds per horsepower. The Mustang GT Convertible has a power to weight ratio of just 8.9 pounds per horsepower. Also, the Mustang GT chassis was designed with convertible use in mind and because of that, the engineers and designers built a chassis that needs as little extra reinforcements as possible. Since the Challenger was not designed with convertible use in mind, adding a convertible top very well may add more than the 117 pounds from the Mustang GT.

In other words, the Chrysler Group likely has continued to ignore the demand for a Dodge Challenger convertible with the current chassis because it would simply be too heavy to compete. The good news is that there have long been rumors that there is a smaller Mopar muscle car coming in the next few years – a car that is expected to be named the SRT Cuda. It is believed that if the SRT Cuda exists, it will be lighter than the Dodge Challenger so perhaps the Cuda will come with a convertible option. Then again, the Cuda is expected to have Viper-like power outputs with a price that will be substantially higher than the Challenger so on the off chance that a Cuda convertible did become a reality – it won’t be competing with the likes of the hottest selling Camaro or Mustang convertibles.