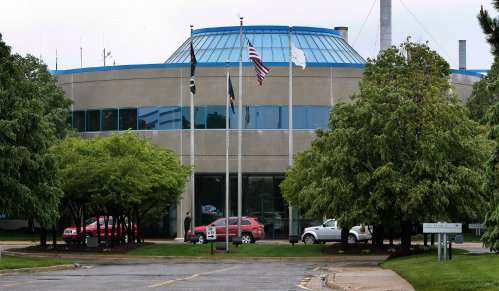 Chrysler’s Jefferson North Assembly Plant in Detroit restarted production today - just a day after one worker murdered the other before taking his own life – and more details of the crime including the two men’s names have surfaced.
Advertisement

Although Detroit Police have not officially announced the names of the two men involved in the stabbing murder that occurred at the Jefferson North Jeep Grand Cherokee and Dodge Durango plant yesterday, sources (who wish to remain unnamed) have provided the names of the two men involved along with a possible motive. Production started back up today and workers headed back into the plant as Detroit Police had finishes their investigation of the crime scene.

The man with the knife, who did the stabbing, was Jeff Hunt while the man who was stabbed and died on the scene was Keith Readus. Both men were long time Chrysler employees and Readus served as the union steward for the UAW Local 7 although he no longer held that position. Hunt, who was said to be a quiet guy in his 40s, had previously been fired for being involved in a fight in the plant but he had been rehired. Rumors among the other workers at JNAP suggest that the altercation that left Readus dead was over the wife of Jeff Hunt, who also works on the line at Jefferson North. It is unclear if Readus had been involved in some inappropriate activity with Hunt’s wife or if it was some factor not related to infidelity. Several accounts also indicate that the issue between Readus and Hunt had been an ongoing one.

Unfortunately, there are a variety of descriptions about how the incident began but all of the eye witness accounts end with Hunt ending Readus’ life with a knife. Many reports suggest that a fight broke out between the two men near a loading dock which quickly ended with Hunt stabbing Readus. In some of these accounts, Hunt approached Readus, whispering something in his ear which began a fight that ended with the stabbing. In others, it began as a typical argument that escalated to a fist fight which turned deadly when Hunt first stabbed Readus in the stomach and then in the back, before slitting his throat. Other eye witness reports indicate that Hunt came up behind Readus while the victim sat in the break room, slitting his throat and slipping back out of the room with no physical incident. Regardless of how it started or took place, the result of the fight was Keith Readus being pronounced dead at the Chrysler Jefferson North Assembly Plant.

During the fray after the incident that reportedly created a horrific, bloody scene, Jeff Hunt slipped out into his red Jeep Grand Cherokee after dropping the murder weapon at the scene. Detroit Police put out a bulletin for Hunt’s arrest but it was ended when his vehicle was found on Detroit’s Belle Isle – an apparent self inflicted gunshot wound to the head having ended his life.

As this article is published, Detroit Police have still not even officially released the names of the two deceased men nor have they offered their take on any possible motives. TorqueNews will continue covering this unfortunate event – bringing you any news as it becomes available.

Anonymous wrote on September 24, 2012 - 6:47pm Permalink
It is shameful how people are just allowed to print anything. Factual statement, Jeff Hunt was never fired for anything.