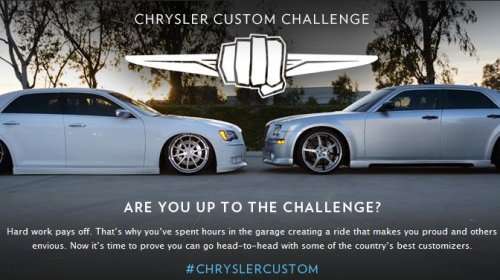 Each year at the SEMA Show in Las Vegas, the Chrysler Group features a collection of privately owned vehicles and for the 2013 Las Vegas automotive super-convention – Chrysler has looked to the social networking world to help pick the vehicles that the company will feature this year in a new contest with thousands of dollars in prizes.
Advertisement

While the Dodge brand has become the more commonly featured moniker at the SEMA Show, the Chrysler Group is looking to highlight that brand that sports the company name in 2013 with the new Chrysler Custom Challenge. This contest – which is only open to Chrysler brand vehicles (not Dodge, Jeep, Ram, Plymouth, etc) – will give three customized Chrysler vehicle owners a chance to show off their cars at the 2013 SEMA Show where judges will pick their favorite of the three. That grand prize winner will receive a three day/two night trip for two to the 2014 North American International Auto Show in Detroit including a “luxury travel package”, a check for $5,000 and the title of being the 2013 Chrysler Custom Challenge Champion. That grand prize package comes in addition to the first two phases of the contest where competitors can win a trip to visit the Chrysler Design center in Detroit or a trip to the SEMA Show in Las Vegas.

The Chrysler Custom Challenge is broken into two phases with prizes handed out along the way.

The first phase of the contest asks owners of customized Chrysler brand vehicles to submit pictures of their car, SUV or minivan to the Chrysler brand Facebook page. Fans of the Chrysler FB page will then vote for their favorite submissions and from this first phase, three finalists and ten runners up will be selected. For the runners up, their prize includes a four day/three night trip for two to Detroit to attend a Chrysler Design Day at the company headquarters in Auburn Hills, Michigan. Those folks will also win $100 in Chrysler brand merchandise. The second phase takes the three finalists from phase one and with the help of a professional camera crew, these owners will each make a walk around video highlighting the key features of their customized Chrysler brand vehicle. These three videos will be posted online where both fans and official judges will vote to pick their favorite of the three finalists. In addition to having the professional camera crew help make a video of their vehicle, each the three finalists from phase one will also win a seven day/six night trip for two to Las Vegas where they will attend the 2013 SEMA Show and $250 in Chrysler brand merchandise. While at the 2013 SEMA Show, a panel of guest judges will pick help pick the grand prize winner out of the three finalists from those videos and the top dog will receive the grand prize package mentioned above. Oh, and those two finalists who go to Vegas for SEMA and do NOT win the title of being the 2013 Chrysler Custom Challenge Champion each get a check for $4,000 for finishing second and third.

The first part of phase one of the 2013 Chrysler Custom Challenge has just opened so as this article goes live on our site, there are only 13 entries and 12 of those are late model Chrysler 300 sedans. The other vehicle is a super clean 1979 Chrysler Cordoba packing a built 340 cubic inch V8 (shown below). Owners have until June 24, 2013 to get their entries in to be included in the first phase of voting and with prizes being awards to the top 13 vehicles – there is no reason not to upload a picture and some information on your custom Chrysler vehicle. Even if you don’t have a Chrysler vehicle, you can get involved with the 2013 Chrysler Custom Challenge by visiting the Chrysler brand Facebook page. By clicking this link, you can check out all of the entries in the contest so far and vote for your favorites. All you need to vote is a Facebook account!

The Chrysler Custom Challenger has already begun and as mentioned above, phase one will run through June 24th when the top three finalists and the ten runners up are announced. The grand prize winner will be announced on Friday, November 8th at the 2013 SEMA Show.