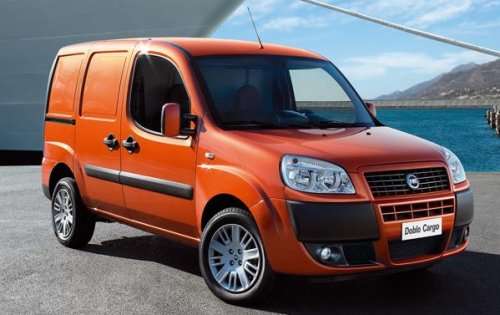 The Mopar superfans over all Allpar have dug up an interesting handful of new trademarks applied for by the Chrysler Group that offers some insight into some upcoming models – as well as also raising some interesting questions about what is to come.
Advertisement

The Chrysler Group has filed for trademarks on seven names under the motor vehicles, their structural parts, trim and badges category with the US Patent and Trademark office. Those names include Detroit Motor Works, Wrangler Freedom Edition, 8 Mile, Crossroad, Chrysler 100, Ram ProMaster and Ram ProMaster City.

The Ram ProMaster and Ram ProMaster City are expected to be Fiat vans reformulated for the US market under the Ram Truck brand. The ProMaster will most likely be a larger vehicle (similar to the old Dodge Sprinter) based on the Fiat Ducato that will take aim at the new Ford Transit van while the ProMaster City will likely be a smaller “van” based on the Fiat Doblo (shown above on the right) - which will compete directly with the Ford Transit Connect. Rumors of the Fiat-built Ram cargo vans have been afloat for some time with no real idea as to when they will arrive but with the early success of the Ford Transit Connect and the arrival of the larger Ford Transit, Chrysler may act sooner than later on the roomy Euro work van trend.

That leaves us with Detroit Motor Works, Crossroad and 8 Mile…all of which are curious and serve to drive lots of speculation with no real concrete idea what they might be. Detroit Motor Works almost sounds more like a performance shop than a trimline so perhaps Detroit Motor Works will be some performance oriented trimline for future Chrysler Group models. Crossroad is another name that could very easily appear on a Jeep model or maybe one of the other company utes like the Journey or Durango. As for 8 Mile – this notorious street in Detroit has become synonymous with the Motor City thanks to the hit movie by Detroit-based superstar rapper Eminem. The Chrysler Group has used the “Imported From Detroit” tagline for the Chrysler brand so perhaps the company plans to have some rugged, sinister-ish trimline for future models. Perhaps it will be a new Chrysler 300C sedan fitted for urban warfare on the streets of Detroit with bullet proof glass, armor plated doors and a Spy Hunter inspired oil-slick system to help the driver avoid become yet another statistic in Detroit. (Just playin’ – I love you, Detroit)

Or it will just be a trimline with some power and attention to music since Detroit is best known for music and American muscle. In any case, the 8 Mile trimline to whichever vehicle or vehicles get it will likely tie in to the roots of the city and help Chrysler emphasize their own Detroit roots.