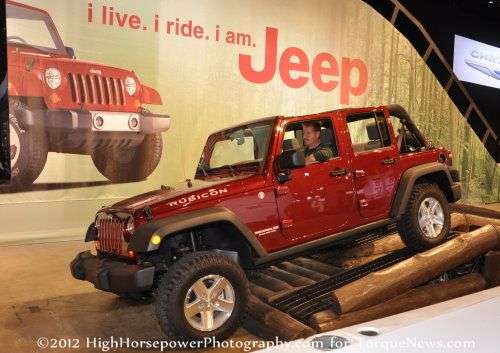 The Chrysler Group has just announced that they are recalling almost 68,000 Jeep Wrangler sport utility vehicles from the 2010 model year over a concern that debris could get packed between the catalytic converter and the protective underbody skid plate – possibly leading to a fire under the vehicle.
Advertisement

The 2010 Jeep Wrangler skid plate recall pertains to select vehicles that were built before July 14th 2010 which are equipped with the automatic transmission and the corresponding protective skid plate. In total, 67,872 examples of the self-shifting sport utility vehicle are included under the new recall. Chrysler is aware of no accidents or injuries stemming from this problem. The problem relates specifically to the early 2010 models because the catalytic converter had been relocated for the 2010 model year in order to conform to new federal standards. Models from the 2009 model year have the converter located further from the skid plate so those slightly older models don’t face the same situation.

It should be noted that the 2010 Jeep Wrangler owner’s manual states instructs the owners to make sure to clear debris from the underbody skid plate area but we all know that not everyone reads the owner’s manual...or does what it says. Even though this is something that can be prevented through proper maintenance, it presents a clear safety risk to have the catalytic convertor setting debris jammed against the skid plate on fire so the Chrysler Group has made the call to get these 67,872 Wrangler models back to the dealerships to address the problem.

The Chrysler Group will begin notifying owners of these recalled 2010 Jeep Wrangler SUVs starting later this month, asking that these vehicles are returned to the dealership for servicing. The skid plate will be removed and in its place, a new skid bar will be installed. The skid bar provides similar protection to the transmission as the plate but it does not allow so much debris to get gathered up so there is less chance of this debris catching fire. Chrysler actually changed the design of the factory skid plate system for the Wrangler, swapping to this underbody skid bar in late 2010 and continuing with this design since then. The company made that change because the bar provided adequate protection while also weighing less, aiding in the company’s effort to improve fuel economy through weight reduction. However, now that the company has recognized the risk of fire, the early 2010 models will also get the skid bar to prevent this fire hazard.

Owners can contact Chrysler for more information by calling 1-800-853-1403 in reference to company recall M22.

Deb Monauni wrote on May 29, 2012 - 4:35pm Permalink
Jeep Wranglers have been catching on fire for years, and Chrysler has been sweeping it under their giant corporate rug for years. The 07 Wranglers were recalled in 09 for a fire risk due to the transmission, Chryslers answer to the re call was to install a warning light that is supposed to warn the driver of a fire. The problem with this is they did not correct the cause of the fires, just installed a warning light, and the warning lights don't work. I bought my 07 Wrangler in 2010, it was recalled and the warning light was installed, I knew nothing about the risk of fire, or the warning light that was installed. In February my Wrangler caught on fire in my drive way, exploded and caught my house on fire, no warning lights went off. The inspectors determined that the fire started in my transmission, however they are inconclusive as to what caused my transmission to catch on fire. Wranglers are a defective vehicle that should be taken off the road