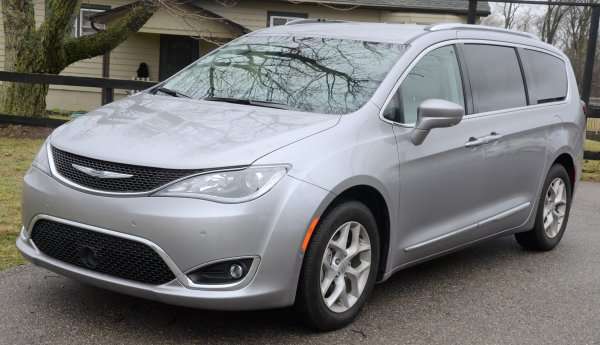 The new Chrysler Pacifica offers all sorts of advantages over the competition when it comes to interior amenities, but more importantly for some buyers, the new Pacifica offers the best driving dynamics in the minivan segment – feeling more like a sedan than a 7-passenger people mover from behind the steering wheel.
Advertisement

Before getting into my on-road review of the new Chrysler Pacifica, let me clarify a few points about the driving dynamics of this new minivan from the company that invited the minivan.

In saying that the Pacifica offers the best driving dynamics among the minivan segment, I am not trying to suggest that the new Chrysler minivan is your next weekend racing project. After all, this is still a minivan built with family function in mind, so if fun-to-drive-factor is your key concern when shopping for a new vehicle – you shouldn’t be shopping for a minivan. On the other hand, if you are shopping for a minivan and you want the one which offers the most fun-to-drive-factor, the Chrysler Pacifica is your best bet.

Also, I understand fully that many minivan buyers don’t care at all about driving dynamics. For those people who rank driving dynamics at the bottom of their list of new vehicle priorities, the Chrysler Pacifica will have loads of appeal with the premium UConnect Theater infotainment system along with the huge cabin featuring the versatile Stow-N-Go seating system - offering room for 7 adults and more cargo space than the competition. For some people, a minivan is simply a tool to get the kids to and from karate or soccer practice and in that regard, it is one of the best options in the segment, but for buyers who care how their vehicle feels on the road – the Pacifica is a winner.

The Old Minivans
When Chrysler invited the minivan back in the 1980s, it was a high-riding vehicle with a high center of gravity, lots of body roll and fairly lackluster cornering capabilities – but it didn’t matter, because the people who buy “people movers” typically haven’t cared about how the vehicle handled, so long as it offered the smoothest ride possible. That was the case with minivans for some 20+ years and really, that was the case among many roomy, affordable vehicles. It didn’t matter that the Caravan handled poorly because the K-cars on which they were based didn’t handle well either.

The Dodge Caravan and Chrysler Town & Country began to receive some driving dynamics improvements as they carried on as the only American minivans, battling the Honda Odyssey and the Toyota Sienna, but with the new Chrysler Pacifica, FCA has created the best driving minivan on sale today.

Driving the Chrysler Pacifica
The new Chrysler Pacifica is only offered with the 3.6L Pentastar V6 mated to a 9-speed automatic transmission. This drivetrain delivers 287 horsepower and 262lb-ft of torque, which isn’t the most powerful package in the minivan segment, but thanks to the gearing of the 9-speed gearbox, the Pacifica feels surprisingly quick in any normal driving situation. Whether you are hurrying away from a stop light in an effort to get over before your land ends or putting the hammer down to blow around slow-moving highway traffic – the Pacifica’s Pentastar engine makes this minivan very quick. The 9-speed transmission shifts almost seamlessly under normal driving around town, but when you are pushing the Pacifica hard, the transmission delivers quick, firm shifts. Again, I am not talking about blistering quarter mile or 0-100 times, but as minivans go, the new Pacifica packs plenty of power for any normal driving situation.

However, in talking about driving dynamics, I’m really not talking about power and acceleration abilities, as the previous generation Chrysler (and Dodge) minivans with the Pentastar engine offered similar power. Where the Pacifica shines over the competition comes when you begin carving your way along a twisty country road, as this new minivan will take the turns better than anything in the past.

While I was driving the new Chrysler Pacifica, a friend with a previous generation Dodge Grand Caravan asked how the new van handled. I thought about it for a second and explained that when I was behind the wheel, the Pacifica feels far more like a midsized sedan than any other minivan I had driven. The Pacifica does have a slightly higher seating position for the driver than you will find in most sedans, but it doesn’t present the high-riding feel that you get with older minivans old small SUVs/crossovers – so from the driver’s seat, it feels more like a midsized sedan than a 7-passenger van when you are sitting still.

More importantly, when you hit the road, the sedan feel is even more prominent, as the new Chrysler Pacifica has substantially less body roll when you are zipping along a twisty road, accelerating through a curved on-ramp or taking on a high-speed highway bend. You do get a touch of sidewall movement with the standard 18 inch wheels of the Pacifica Limited, but that is to be expected with any wheel/tire combination of this size. Fortunately, when equipped with the optional 20-inch wheels, the slight bit of sidewall play during back-and-forth cornering is nearly nonexistent and the suspension system is responsive enough that you can push the Pacifica through a series of turns just as hard as you can most midsized sedans.

In fact, while driving the Chrysler Pacifica near my home in Michigan, I took the new minivan to the same twisty roads where I test the handling capabilities of cars. This includes short straight stretches which lead into series of turns, so I was able to accelerate towards a turn, brake hard enough to safely make it through the first turn while the suspension and steering components allowed me to smoothly slice through the twists and turns. The steering response isn’t quite as sharp as it is with your more sport-oriented sedans, but at the same time, the Pacifica offers a major departure from the unconnected steering feel of your average people mover.

Now, I do understand that comparing the Chrysler Pacifica to the likes of the a popular midsized sedan seems like an odd pairing, but keep in mind that midsized sedans are the bestselling vehicles in America after full size trucks. Midsized sedans have gone through an improved driving dynamics shift of their own in the past 5 years and these cars have played one of the biggest roles in the overall improvement in fun-to-drive-factor in the US auto industry. For a minivan, which has often been labeled as an entire class of vehicles with poor driving dynamics can present a similar feel to the most popular cars in America – you know that the minivan segment is headed in a great direction.

Finally, since many minivan buyers are more concerned with comfort than driving dynamics, the new Chrysler Pacifica combines the handling traits with a smooth, quiet ride – even on Detroit’s rough highways.

No longer does driving a minivan mean that you spend your days in a loud, stiff box on wheels which sways like a boat on rough waters in a series of turns. The Chrysler Pacifica has the ride quality that today’s buyers expect from every new vehicle, but for those buyers who want a minivan that is as enjoyable to drive as it is versatile, this curvy new minivan from Chrysler is one that people who enjoy driving will enjoy driving every day.

No longer does driving a minivan mean that you have to dread your time behind the wheel and while this won’t challenge a sports car – the new Chrysler Pacifica is the best “driver’s minivan” on the market today. The new Pacifica proves that you can have a minivan that offers a smooth ride, great fuel economy, premium interior features and great driving dynamics, all in the same sleek package.