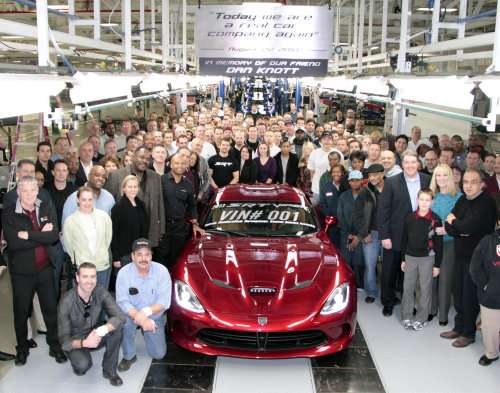 Production of the 2013 SRT Viper officially began in early December but with the high level of quality control procedures being enforced on these new Mopar supercars, it wasn’t until today that the first 2013 Viper rolled off of the Connor Ave assembly line. Waiting there to meet Viper #001 was Steve Thomas – the man who won the right to own the first SRT Viper at last year’s Barrett Jackson Auto Auction – who bought along his son and his wife for the big event. Joining the Thomas family was SRT President Ralph Gilles, Chrysler and Fiat Chief Executive Officer Sergio Marchionne and the group of engineers, designers and assembly workers who labored to take the 2013 SRT Viper from a concept drawing to an awesome American supercar.

2013 SRT Viper VIN #001 is a GTS model finished in the same Stryker Red Tinted Pearl exterior paint that was seen on the Viper that debuted at the New York Auto Show earlier this year. While the starting price of most 2013 Viper GTS models will be around $121,000, Thomas paid $300,000 for Viper VIN #001 at the Barrett Jackson Auto Auction. This was a huge markup over the MSRP for the rights to own the very first 2013 Viper but unlike other buyers who will be supporting the Chrysler Group – the proceeds of Thomas’ Viper bid with the people at Barrett Jackson will go to support the Austin Hatcher Foundation. The Austin Hatcher Foundation is a charity group that helps provide funding both for the support of pediatric cancer research as well as supporting the families of kids undergoing cancer treatment. Thomas is from the Oklahoma City area and along with being an avid car collector, Thomas is the president of a precious metals company called APMEX, Inc – hence the ability to lay down 300 large on a new Mopar supercar.

Steve Thomas’ 2013 SRT Viper VIN #001 is an instant collectable both in the Mopar world and in the general automotive world for a variety of reasons. First of all, this deep metallic red 2013 SRT Viper is the very first production unit of the newest generation of the fabled Viper and with this new generation comes a 640 horsepower V10 – making this Viper the most powerful naturally aspirated car in the world. Also, Thomas’ Viper is the very first ever produced under the SRT brand. While SRT has been well known for years in the high performance world for their involvement in special edition, high performance trimlines of the Dodge Challenger, Dodge Charger, Jeep Grand Cherokee and the Chrysler 300C (along with others in the past), the 2013 Viper is the first vehicle marketed as an SRT brand vehicle and not an SRT trimline of a Dodge, Chrysler or Jeep vehicle. The Chrysler Group has big plans for the SRT brand and 20 years down the road, Steve Thomas will be able to say that he owns the very first ever SRT vehicle.

One interesting fact with 2013 SRT Viper GTS VIN #001 is that this particular Viper does not wear the unique Launch Edition package that will adorn many of the early Viper GTS models sold around the US. The Viper GTS Launch Edition is essentially a fully loaded Viper GTS fitted with a unique interior, unique wheels and a special GTS Blue exterior paint with dual white painted stripes that will only be available on these limited edition Launch Edition models. However, Steve Thomas’ 2013 Viper GTS looks identical to the first Viper introduced to the world earlier this year in New York.

There is one bit of bad news for Steve Thomas and his family as they were not able to leave with their 2013 SRT Viper GTS after today’s celebration. Their new Viper will be shipped to their local (and very well known) dealership - Tomball SRT of Tomball Texas – when the production Vipers begin shipping in February. Steve Sharples of the SRT brand also stated that when Viper VIN #001 arrives at Tomball SRT, the dealership plans to deliver this ultra special supercar directly to the Thomas’ home. Even with the wait, there is no question that Steve Thomas has gotten himself an incredible supercar that will most certainly become one of the most collectable vehicles in American motoring history.

In the image above on the right, Steve Thomas is shown with his wife and son on the right side of the image (his wife is wearing the bright blue shirt) with company CEO Sergio Marchionne standing next to her – in what looks to be a black sweater, of course. SRT Boss Ralph Gilles is shown on the left side of the Viper in this image with his hand on the hood near the windshield.

The video below offers a look at the introduction of the 2013 SRT Viper production unit #1 with Steve Thomas checking out his new supercar.