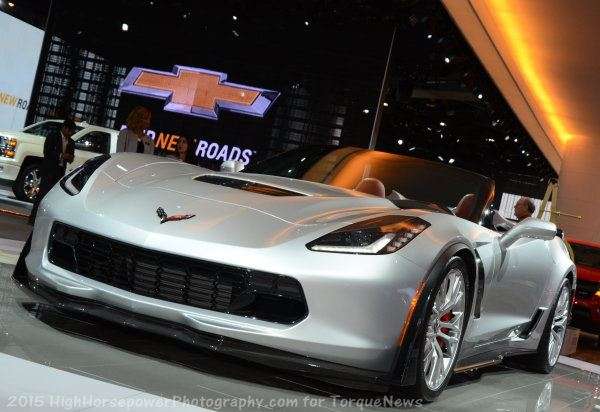 Corvette Chief Engineer Tadge Juechter recently told Autoline’s John McElroy the mid-engine Chevrolet Corvette C8, which we speculate could be called the Zora, does not exist- seemingly putting to rest the ongoing rumors that the next generation Corvette will rely on an all-new mid-engine design.
Advertisement

For the past few decades, there has been an ongoing rumor that the next generation Chevrolet Corvette would feature a new mid-engine design that would allow it to better compete with the European supercars. Not surprisingly, when the C7 Corvette debuted with a traditional front engine configuration, the rumor immediately surfaced suggesting that the C8 Corvette would finally be the mid-engine supercar that America needs to defeat Europe’s best (even though the C6 Corvette ZR1 has already proven itself to be better on a race track than almost any European supercar ever).

That rumor became far more credible when an image showing what many believed to be a mid-engine Corvette test chassis under a funky Holden body hit the net. That image surfaced after a GM exec had stated that development of the C8 Corvette was already underway, so for the first time ever, those expecting a mid-engine Corvette really had something on which to build those hopes.

However, with the comments made by Corvette Chief Engineer Tadge Juechter while speaking with Autoline After Hours, the possibility of seeing a mid-engine Corvette any time soon seem far less likely.

No Such Car Exists
While speaking with Autoline’s John McElroy on all things Corvette, the discussion shifted to the possibility of a mid-engine Corvette that we have romanticized could be called the Zora, but Juechter’s reply was the furthest thing from what we could have hoped. When some recent sketches of the supposed mid-engine Corvette came up, the Corvette Chief Engineer joked that he would “have to check that out because I know no such car exists”.

A discussion about a future vehicle can’t be much clearer than the man responsible for the future of said vehicle coming right out and saying that a mid-engine Corvette Zora doesn’t exist. Had Juechter answered with the normal “we do not comment on future models”, it would have left some discussion about the C8 Corvette featuring a mid-engine design, but these comments definitely seem to finally put the rumor to rest – for now.

A Mid-Engine C7 Corvette was Considered
During the course of the discussion with Tadge Juechter, the Corvette engineer did state that General Motors had considered a mid-engine design for the C7 Corvette, but they found that it would compromise ride quality too much. While the Corvette is one of the most well-known and well-respected performance cars in the world, it is also a vehicle that is driven on public roads far more than on race tracks, so while the mid-engine design would yield all-new levels of performance never before seen from the mighty Corvette – the ride quality would be compromised too much on the road. Because of this, the C7 Corvette was built on a traditional front engine design and based on owners’ accounts, this decision has worked out just fine.

So, for the time being, it appears as though there is no mid-engine Corvette waiting in the wings so when the 8th generation Chevrolet supercar arrives in the next few years, the odds are very good that it will have the engine mounted in front of the driver. That is, of course, provided that Tadge Juechter was being totally honest that there is no mid-engine Corvette in the works, but only time will tell.

Steven King wrote on April 20, 2015 - 12:46am Permalink
I am sure there are no production mid-engine vettes. However, during 2013 Grand Prix there were variants of C-7 mid-engine prototypes. One was Gainsco's 99 Red Dragon.

LG's New EV Battery Plant Is a Welcome News for Tesla
Tesla Giga Berlin's New Hurdle: It's Not Only the Gov't, but Now Tesla Itself
END_OF_DOCUMENT_TOKEN_TO_BE_REPLACED