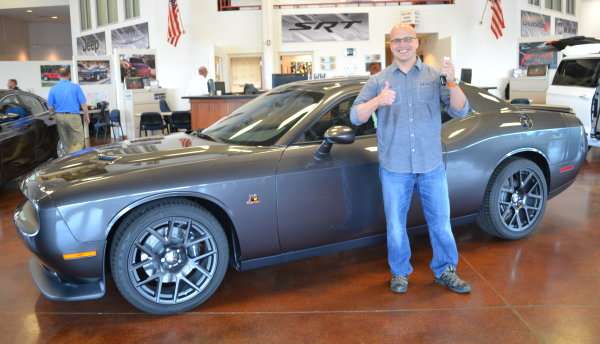 The Chrysler Group has just announced the winner of their FCA US LLC 2015 National Sweepstakes and of the 1.2 million entries received, firefighter Kevin Arias of Oswego, Illinois won the prize and took home a 2016 Dodge Challenger R/T Scat Pack.
Advertisement

If you have ever attended a big event sponsored by the Chrysler Group where Dodge, Chrysler, Jeep Ram or Fiat vehicles were in display, you likely had the chance to get something for free in exchange for filling out some information about yourself. For example, the 2015 Shot Show in Las Vegas had a Ram Truck display where attendees could sign up to be part of the FCA US LLC 2015 National Sweepstakes and in doing so, they may have gotten a Ram brand hat, stickers or some other “free stuff”. Other examples of places where you can sign up includes events like the Ram and Jeep drive events at major auto shows, where offering up some personal information got you a chance to drive a new vehicle in a specially crafted outdoor course that had been set up indoors.

Anyways, if you have been to one of these events and you signed up (usually just to get the freebies), you may have been entered in the FCA US LLC 2015 National Sweepstakes or something like that. These contests promise the winner a $45,000 voucher towards a new Dodge, Chrysler, Jeep, Ram or Fiat vehicle and while we all sign up happily with the hopes of winning the grand prize – we never hear much about the outcome of the contests.

However, today we bring you the story of Kevin Arias, who won the FCA US LLC 2015 National Sweepstakes and in doing so, he took home a new 485 horsepower Dodge Challenger.

The FCA US LLC 2015 National Sweepstakes Results
Over the past year or so, the Chrysler Group had displays at events all over the country where showgoers could sign up to win a $45,000 voucher towards a new vehicle. Kevin Arias signed up at the 2015 Shot Show last January and after doing so, he hadn’t thought much about the prospect of winning a new muscle car. In fact, Arias had given up on being able to afford a muscle car within the last few months, which he recounted for the Chrysler Group winner announcement.

“Ironically, a few months ago I had said to my wife, ‘I don’t think I’ll ever get my hot-rod.’ I’ve wanted a hot rod for as long as I can remember, so when FCA told me I won a car, I immediately chose the Dodge Challenger,” said Kevin Arias, winner of the 2015 FCA National Giveaway. “I’m feeling truly blessed. I never win anything, so when I got the call from FCA it was unbelievable. On top of that, everyone at FCA has made this experience just awesome.”

Arias could pick any vehicle that cost less than $45,000 and he went for the car with the most bang for the buck – the Dodge Challenger R/T Scat Pack. The 392 cubic inch Hemi delivers 485 horsepower, making it the most powerful car for the money in the American auto industry. His new muscle car was delivered to Tyson Chrysler Dodge Jeep Ram in Shorewood, Illinois, where he picked it up (shown in the image above).

“It’s exciting to have the opportunity to gift one of our event attendees with an FCA vehicle,” stated Jason Russ, Head of Experiential Marketing for FCA US LLC. “Given how Kevin Arias heroically serves his community as a Chicago fire fighter, it gives us great pleasure to present him with his new Dodge Challenger. We anticipate that he will have many years of joy from his brand new muscle car.”

If you want to sign up for the 2016 FCA US LLC National Sweepstakes, you can do so at one of the events around the country, or you can sign up at the official contest website. Click here for a closer look.