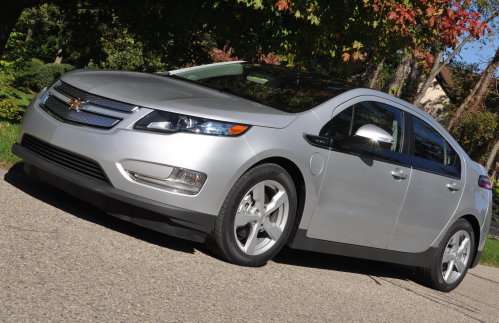 While the automotive world is focusing on the 2012 New York Auto Show, automakers from around the world have issued their March 2012 sales reports and for the second month in a row – the Chevrolet Volt badly outsold the Nissan Leaf, this time with a margin of almost 4 to 1 in favor of the range-extended electric Chevy.
Advertisement

The Nissan Leaf started 2012 by beating the Chevrolet Volt by a narrow margin in January but since then – the battle between the two bestselling mainstream electric drive vehicles has been all Chevy. Through the third month of 2012, sales of the Chevy Volt are booming while Nissan is struggling to deliver the initial 20,000 Leaf electric vehicles that were preordered over a year ago.

The 2012 calendar year may have brought about a slow start for the Chevrolet Volt but with 2,289 new electric Chevy’s sold last month, the Volt sold more than twice as many units in March as they did in February. The sales figure of almost 2,300 units sold for GM brings about a 277% increase over the same month in 2011 and in moving so many Volts last month – General Motors sold more of their extended range electric sedan in March than Nissan has sold Leaf electric vehicles all this year. Through the first quarter of 2012, General Motors has sold 3,915 examples of the Chevrolet Volt, an increase of 224% compared to the first quarter of 2011 when Chevy moved just 1,210 Volts.

The Nissan Leaf had another tough month in March 2012, delivering just 579 vehicles last month. The good news is that this is an increase of 101 units over what was an absolutely abysmal February along with showing an increase of 94% over March 2011. The bad news is that things started slow for the Leaf in 2012 and they really haven’t gotten much better. Nissan has delivered just 1,733 Leaf electric vehicles through the first quarter of 2012 and while that does present an increase of 283% compared to Q1 of 2011 – the fact that Nissan had multiple months in 2011 where they delivered more Leaf units than they have through the first three months of 2012 is not a good sign.

Many critics of the electric car movement in the United States speculate that they are a fad and once the initial demand has been satisfied, sales will slow. This seems to be what is happening with the Nissan Leaf but we should all keep in mind that Nissan isn’t actually working to sell the Leaf but instead, the Japanese automaker is still working through the long list of preorders from the initial launch program. This means that the hangup isn’t in finding people to buy the Nissan Leaf but instead – it appears that Nissan’s slow delivery process is allowing the Chevy Volt to pull away in annual sales.
On the other hand, the growing success of the Chevrolet Volt shows that the American public hasn’t exactly gotten tired of the “electric car fad”. Unlike Nissan, Chevrolet did not offer a preorder program so month to month, Chevrolet is building cars with the intention of selling them in dealerships rather than working to fulfill year-old orders. The result has been positive as the progressive growth of the Volt to more dealerships around the country has allowed GM to post a steady increase in sales.

The key advantage that the Volt has over the Nissan Leaf is that there is no concern of range anxiety thanks to the Volt’s range extending gasoline engine. Even with the price of gasoline nearing the $5 mark in the US, consumers are showing that they do not want to be limited to 100 miles of driving distance and the 100+ mile per gallon capabilities that we found are very realistic in the Volt (click here for our 109mpg Chevy Volt review) may become more and more enticing as prices continue to rise.

Anonymous wrote on April 4, 2012 - 3:25pm Permalink
Your arguments are illogical and self-contradictory. If the Leaf still has a waiting list (which it does), then "demand" has not slowed. Nissan is still selling every Leaf they're making. They're just not making enough of them. Given the problems they had in Japan shortly after the Leaf went on sale (Earthquake, Tsunami, Nuclear Powerplant meltdown), and the continuing problems in Japan (brownouts and blackouts from power shortages, due to the Nuclear meltdown and taking a number of other Nuclear power plants offline as a safety precaution), I'm not terribly surprised that they're having trouble meeting demand. People seem to have forgotten the severity of the triple disasters that occurred in Japan, just over a year ago, but trust me, as someone that works with people that live in Japan, they are not anywhere close to back to normal yet. The Nissan plant they've opened in Tennesse helps with production, but a lot of their parts still come from Japan. I'm glad the Volt is finally selling better (retooling their production line last summer allowed them to starting making more), but that's no reason to denigrate the Nissan Leaf. It's a great car, and I'm sure they'll ramp up production as soon as they're able.