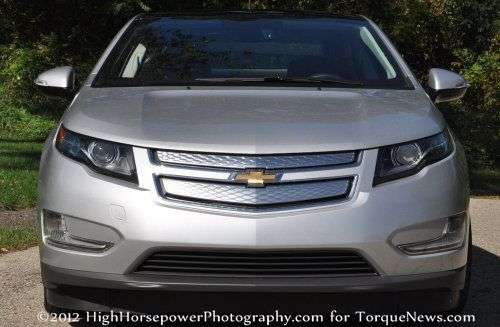 General Motors may not have gotten the start that they had hoped to in the 2012 battle of EVs between their Chevrolet Volt and the Nissan Leaf (with the all-electric Nissan edging the Volt in January) but in February 2012 the Chevy Volt battled back in a big way – outselling the Leaf by a margin of more than 2 to 1.
Advertisement

The Chevrolet Volt had a great end to 2011, beating the Nissan Leaf in sales through October, November and December but they weren’t able to keep that momentum going in January 2012, as the Leaf bested the Volt by a margin of 676 to 603. However, with the sales figures for February being announced, the Chevy Volt has claimed the second month of 2012 by a massive margin of 545 units – selling more than double the number of Leafs in February.

February 2012 was a great month for the Chevrolet Volt with 1,023 units sold after a very slow January in which Chevy moved just 603 examples of their extended range electric vehicle. The slow sales in January were certainly not the way that GM had hoped to start 2012 with the Volt after selling over a thousand units each of the final three months of 2011 but with 1,023 Volts sold in February, Chevy is back on track for the New Year. After the strong second month of 2012, the Volt has a lead of almost 500 units over the Leaf for the year with 1,626 Volts sold to Nissan’s 1,154 Leaf vehicles sold.

The Nissan Leaf had a surprisingly slow month in February with just 478 units delivered being one of the slowest months for the electric Nissan since early in 2011. The Leaf has struggled a bit since last fall, with the Volt being over 1,000 units every month except for January while the Leaf hasn’t sold over 1,000 units since last September when they delivered 1,031 versions of their super-green hatchback. While this downturn in sales certainly isn’t what Nissan wants to see, the Nissan Leaf will become available across the entire United States this month so there could be an influx of Leaf sales over the next few months.

General Motors has been increasing production of the Chevrolet Volt, including an expansion at the automaker’s Detroit Hamtramck plant and the addition of a second shift so things should (in theory) continue to improve throughout the year. In addition to the Volt, the Opel Ampera will soon increase the volume of vehicles sold with GM’s Voltec drivetrain and there could be more on the way – at least in other markets. This past weekend, I saw what looked like a black Chevy Volt driving through Milford Michigan (the home of GM’s proving grounds) but the car was wearing the distinctive Vauxhall badging so perhaps that European brand will soon have a Voltec powered vehicle of its own.

Nissan is spreading around their technology as well, having used the Detroit Auto Show to feature the upcoming eNV200 – a vehicle aimed at taxi cab use that uses the NV200 chassis and a modified version of the Leaf drivetrain.

Greg wrote on March 1, 2012 - 3:14pm Permalink
Are these worldwide sales numbers or just units sold in the United States?
Anonymous wrote on March 1, 2012 - 4:00pm Permalink
To the writer Patrick Rall Surprised to hear they are running 2 shifts. The plant was closed for 6 weeks (Dec. 23~Feb. 5). They can produce about 2,300 units per month on 1 shift. The sales never even came close to that figure.
Anonymous wrote on March 3, 2012 - 8:45am Permalink
The plant that builds the Volt is on 1 shift. We build about 35 per hour, that includes both versions of the Ampera & Volt exports.
Tim wrote on March 1, 2012 - 8:17pm Permalink
These are US and Canada figures. The Opel Ampera version of the Volt goes on sale sometime around summer if memory serves. I have a 2012 volt and this car is amazing on all levels. Fantastic car.
Anonymous wrote on March 2, 2012 - 3:22pm Permalink
Opel/Vauxhall Amperas are on sale right now in Europe. The first untis have been shipped to customers already. The start is very slow as Opel and Chevi (I orderes a Chevi Volt in Germany) presents a very poor performance in communication. So I still don't have a shipping date of my Volt ordered in November 2011!
Anonymouse Volt wrote on March 1, 2012 - 9:20pm Permalink
Rising gas prices cannot but help sales of electrics. Driving a Volt has been great, and not having to spend time at a gas station is a big part of it, I have not needed to buy gas for it since I bought it in June. That's 5400 miles so far, with less than 2 gallons burned. The seamless operation switch from battery only to gas generator running to charge/power the car has only happened a few times to me.
Anonymous wrote on March 1, 2012 - 11:45pm Permalink
Totally LOVE my Volt. Very fast and fun to drive. Way cheaper than gas. I'll never buy a gas car again. Period.
Martin at www.c... wrote on March 2, 2012 - 11:27am Permalink
The Volt is due to be marketed in the UK under the Vauxhal Ampera label. Roumored to be arriving in September 2012. Pricing appears to be rather more than the Chevy Volt which will be shipping to the UK soon and appears better speced with leather. I get to finally test drive a Volt here in the UK at the end of the month. Any high mileage users that want to give their assesment of the Volt most welcome to tell us their results. We are @cab4one on Twitter :)
Anonymous wrote on March 2, 2012 - 7:02pm Permalink
I've driven a pre-production Ampera (10 miles around Oxfordshire). Fantastic car. Fun to drive and well made - best Vauxhall ever. So much so I ordered one. The first ones will be with owners by May. It's the cheaper model (£29k) that arrives in September.
Laura wrote on March 2, 2012 - 12:07pm Permalink
I've had my Volt for over a year, and have driven 22000 miles. It's perfect for me because I can do my daily commute (28 miles round trip) on all electric (proven for a full year, even in the killer summer heat of Phoenix, when A/C depletes the battery faster), but when I need to visit my family 130 miles away, the car can make it using the gas back-up. It's taken us to Las Vegas and San Diego, too, something a Leaf can't do with any level of practically yet. When the infrastruture supports EVs with fast chargers, it wil be much more practical to go all electric, but for now, the Volt serves its purpose exactly as GM intended it to. Not to mention it's so much fun to drive, has great technology and feels like a luxury car.
Just John wrote on March 3, 2012 - 7:53am Permalink
"...in a big way..."? Are you serious? 1,000 and change is in a "big" way? Here's a news flash for you: Just because it outsold another piece of crap that nobody really wants doesn't mean that it's a success story. The Ford Focus sold over 23,000 in February without government meddling.
Anonymous wrote on March 3, 2012 - 8:49am Permalink
We are on 1 shift at the Volt plant. We also build both versions of the Ampera & the Volt exports.