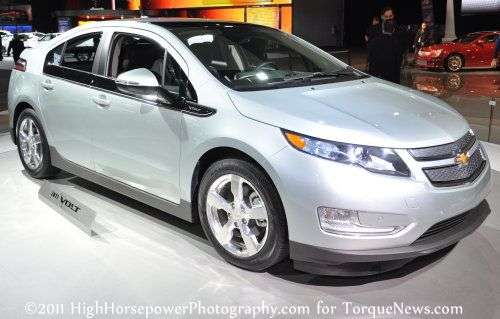 ACEEE: Chevy Volt is one of the worst "green cars" in America

The American Council for an Energy-Efficient Economy (ACEEE) has issued their 8th annual “Greenest” cars list and amazingly, the rapidly-selling 2011 Chevrolet Volt is at the bottom of their list but based on their own explanation of how they arrive at their results makes the list seems incredibly skewed and disappointingly uneducated.
Advertisement

The main focus of the ACEEE in their automotive study seems to hover around the EPA-rated fuel economy standards - including the controversial means by which newer electric-only vehicles like the Nissan Leaf are rated – along with air contaminants involved with the functionality of the vehicles. The Greenest Car according to the ACEEE is the Honda Civic GX, a natural gas powered model that yields just 24/36mpg but thanks to the use of clean-burning natural gas, ACEEE found this to be the greenest car in America. This Civic GX is indeed a very clean-running vehicle but with almost no natural gas infrastructure in the US and no real push for more public filling stations, the NGV-powered vehicles are little more than an ideal fleet vehicle.

If the ACEEE group is so concerned with vehicle emissions, you would think that a purely electric vehicle would be their top choice but because electric vehicles rely on electric that comes from fuel-burning powerplants that create emissions of their own, they only gave the popular Nissan Leaf the second spot. Interestingly, while they used Nissan’s claimed single-charge mileage of 100 miles (the EPA rates the Leaf at 73 miles), the council wasn’t so friendly to the range-extended electric-powered Chevy Volt, as in ranking it last among the super-green cars the group used the 35 mile range stated by the EPA.

It doesn’t make any sense that the American Council for an Energy-Efficient Economy uses one manufacturer’s claim for one vehicle yet uses the less-friendly EPA rating for another vehicle in the same comparison. Helping to further muddy the waters around this new “Greenest” list is the fact that in their explanation of why the 2011 Chevy Volt (that is vastly outselling the Nissan Leaf) placed so poorly, they stated that they “assumed it would use gasoline about a third of the time” – hurting its standing among the other vehicles.

The one major advantage of the 2011 Chevy Volt is that it allows the emission-free driving of an electric car without forcing the driver to worry about any sort of mileage range. I have spoken to several individuals who commute to work in the Detroit area and they put around 40 miles a day on their vehicle. This means that in gentle-driving circumstances, they would be able to avoid using the range-extending internal combustion engine provided that they charged the car overnight. The same is true of the Nissan Leaf and in very similar circumstances, the vehicles are very similar in their actual function but the bottom line with the Leaf is that you are strictly limited to the electrical range. Say that your workplace offers charging stations but when you get there one day, you are low on battery power and there are no available charging stations. With the Leaf you are pretty much out of luck and you had better hope that someone will help you out. However, with the Volt, that same person wouldn’t have any issues even if they cannot use the charging stations provided at their workplace.

The increase in electric-vehicle charging stations around the country allow vehicles like the Chevy Volt and Nissan Leaf to charge more frequently than just when they are sitting in the garage so Volt owners who use the car for a simple commute will not have to use the gasoline engine but unlike Leaf owners, those who buy the new Chevy Volt are able to drive the car 100 miles without having to stress about finding a place to charge it while on the road.

The fact that the ACEEE group “assumes” the amount of gasoline usage combined with inconsistencies in their processes show that their ratings should be taken with a grain of salt and it is disappointing that a group that receives so much attention in the media doesn’t put more effort into basing their lists on uniform information. Based on their findings, they could just as easy say that the Honda Insight is the greenest car because it is a hybrid and nobody buys it – cars that you never see on the road don’t make much of a negative impact on the environment. The fact is that many mindless consumers will read the ACEEE report and see that the list is packed full of basic gasoline powered vehicles that offer no emission free driving – further causing confusion among the average consumers.