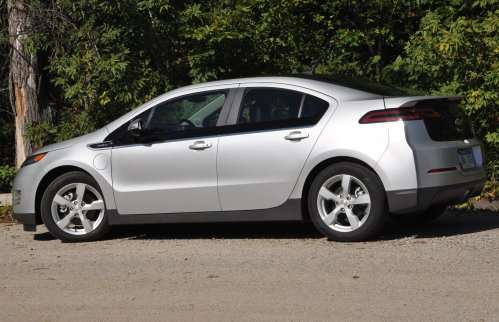 The domination of the electric car segment in the USA by the Chevrolet Volt continued in May 2012 as the electric Chevy outsold the Nissan Leaf by a margin of better than 3 to 1 – helping the Volt to continue to pull away from the Leaf in terms of annual sales.
Advertisement

The Chevrolet Volt started off 2012 with an incredibly slow January, moving just 603 units and trailing the Nissan Leaf for the first month of the year but since then, the Volt has sounded beaten the Leaf in sales each and every month. Even though Nissan had what amounts to one of the better months of 2012 for their EV in May, the steadily strong sales of the Volt allowed the electric Chevy to once again pummel the Leaf.

The Chevrolet Volt moved 1,680 units last month which accounts for a whopping increase of 249.3% compared to May 2011. Chevrolet has been working to push units to dealerships around the country and outside of the original rollout schedule which had the Volt only available in select markets. Even while the steady fuel prices have reportedly slowed the sale of smaller, more efficient vehicles, the Chevy Volt has continued to dominate the electric car segment. On the year, Chevrolet has sold 7,057 Volts, an improvement of 223% over the 2,184 units that they sold through the first five months of 2011.

The Nissan Leaf delivered only 510 vehicles last month as the Japanese automaker continues to attempt to fill the 20,000 preorders placed for the Leaf way back in 2010. With 510 Leafs sold in May 2012, Nissan saw a decline of 55% compared to the 1,142 vehicles sold in May 2011 – likely made especially hard to stomach by the fact that GM is selling Volt sedans as fast as they can build them. Nissan has sold just 2,613 Leaf electric vehicles and while that proposes a 20.6% increase over the first five months of 2011 – it pales in comparison to the increase of 223% posted by the Chevy Volt.

For the year, General Motors has sold 7,057 examples of the Chevrolet Volt while Nissan has sold only 2,613 copies of the Leaf – accounting for a lead of 4,444 units for the Chevy. The Nissan Leaf is selling at a pace of 523 units per month which, at that rate, means that the Leaf is on pace to sell around 6,276 units this YEAR…781 less vehicles than GM has sold Volts through the first five months of the year. Realistically, we cannot expect the Nissan Leaf to continue with such brutally poor sales figures all year but at this rate, the Chevrolet Volt will cruise to the title of being the bestselling electric car in America for 2012. Right now, GM is averaging 1,412 Chevy Volt sedans sold per month which will lead to a year-end figure in the range of just shy of 17,000 units sold.

We should all keep in mind that the Chevrolet Volt led the US electric car segment early in 2011 before the Nissan Leaf came on strong through the summer months but Nissan seems to be struggling to deliver anywhere near 1,000 Leafs a month while the Volt has eclipse that figure every month this year shy of January. Unless the Volt sales REALLY fall off soon…Nissan won’t stand much of a chance of coming from behind this year.