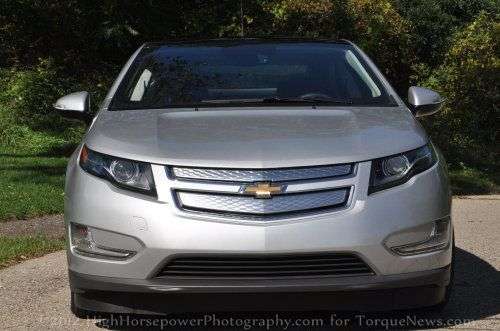 Chevrolet Volt owners have saved over $13.2 million in gas

The Chevrolet Volt has been on sale for roughly 21 months and in that time, Volt owners have driven over 105 million miles with over 67 million of those on electricity – effectively saving those folks a combined total of over $13.2 million dollars at the pumps.
Advertisement

The Chevrolet.com website page dedicated to the Chevrolet Volt has three interesting “gauges” showing the actual number of miles driven by Chevrolet Volt owners around the United States. The Volt communicates with company computers to keep a running, up to the second total of the miles driven by Volt owners around the country, including how many of those miles are driven on electricity. It is really a very interesting feature and you can check it out by clicking here (it will open in a new window).

As this piece goes live here on TorqueNews.com, the Chevrolet Volt has traveled roughly 105,790,000 miles on US roads and roughly 67,020,000 of those miles have been driven on pure electric power – meaning that roughly 64% of the Volt mileage over the last 21 months has been electric. The result of all of this electric driving is over 3.5 million gallons of gasoline saved by using electric power as opposed to gasoline. Considering that the national gas price average right now for the required premium fuel is $3.75, Volt owners have saved a whopping $13.24 million dollars. (Note: our title originally said $13.4 million when it should have said $13.2 million. We have fixed the mistakes to reflect the proper numbers at the time that this article went live. However, as I am adding this new portion to the article, the dollar value of gasoline saved is now right around $13.4 million.)

Some critics complain that the Chevrolet Volt’s gasoline range extending engine requires premium fuel but even if you look at the act of saving 3.53 million gallons of regular fuel (current national average of 3.47/gallon), there are still savings of over $12.2 million dollars. On top of that is the key point that, in addition to saving all of that money on gasoline, Volt owners are also lowering the dependence on a natural resource while helping the environment by emitting less greenhouse gases when running on electricity.

The Chevrolet Volt has had a great year, selling over 1,100 more units in the first six months of 2012 than they did in all of 2011 – allowing the Volt to pull out to a massive sales lead over the all-electric Nissan Leaf. The efficient Voltec drivetrain affords an all electric driving range that can exceed 40 miles when driven properly but unlike the Nissan Leaf, when the battery is dead you can keep on driving with the help of the range extending gasoline engine.

Nissan has taken shots at GM in their advertising campaign for the Leaf, pointing out that it still runs on gasoline and creates emissions but unlike some Leaf owners who are running into massive battery capacity decreases in just the second year of driving (click here for more on the Leaf battery problems) – there have been very few complaints about the Chevrolet Volt. This lack of negative press (aside from the early NHTSA accident concerns) combined with the extended overall range of the Volt could be why the Chevy sedan has become the bestselling electric vehicle in the US market by a massive margin.

scottf200 wrote on July 23, 2012 - 1:12pm Permalink
A couple things to keep in minds is that a) BEV owners like the LEAF typically have to rent/borrow a gas car for the times they need to travel farther thus they are not "zero emissions", b) even though the Volt requires premium it is that way because they tuned the engine to run on it and get higher MPGs. Using regular with get lower MPGs and use more gas. It is very typical for Volt owners to get 40+ MPG using gas only driving on long trips. I did just that when I bought the car in NY and drove it to IL in early 2011. I'm typically over 90% electric but am taking more weekend road trips enjoying the flexibility and quiet ride of the Volt.
13.4 Mil. less ... wrote on July 23, 2012 - 9:11pm Permalink
A better way to look at since this was not spent in the Middle East this money stayed here to fuel this economy. I love my Volt, it is the best car purchase I have ever made. And I am Middle Class America!
Einar wrote on July 24, 2012 - 2:44pm Permalink
I had a relatively efficient car before buying the Volt - but my Volt blows it away. My daily commute is over 172 miles round trip up and over the mountains from California's high desert to the coastal lands by LAX and back again through some of the worst traffic in the nation (an hour and a half to go the first 16 miles yestrerday). My savings with the Volt exceed $450/month, cutting my previous commuting expenses by over 60%. And that doesn't even include the reduced cost of maintenance which is going to be difficult to determine as there hasn't been any needed or called for yet. In the first 50K miles the only "scheduled" maintenance is tire rotation. Then at 50K you are to "check" the air filter. Oil changes occur based on the hours of use of the gas engine or every 2 years (if I continue driving the way I do I'll need to change mine at around 32K miles) - whichever happens first. Brake pads - with regenerative braking they may just last the life of the car! All this and the Volt is one of the best driving cars I've ever owned. You see some people trying to compare it to the Chevy Cruze or the Toyota Prius - these are bogus comparisons. Neither car is as smooth and polished as the Volt, nor as quiet, luxurious, or well put together as the Volt (Motor Trend compared it against the Lexus hybrid and found the Lexus wanting). And most certainly no other car has the owner approval ratings that have been recorded for the Volt - exceeding 93%. If you haven't tried one - do so. You won't regret it. There is one downside to the Volt, though, and that is the price. Yes, it's high, but it is new technology and, like widescreen TVs and computers, new tech costs. After a bit more time to amortize the investment the prices will come down, and batteries will get even better (and cheaper) and the prices will come down more. The question is how long will you wait to buy into this technology? Depriving yourself of the driving pleasure and the inherent savings to be had with this platform while envying those who have made the move to an EREV like the Volt. And always remember - it is an EREV - when you use up the allowed charge from the battery, the gas range extender comes on and you just keep driving!! No time to charge, run on the range extender. Run out of gas, fill it up and keep on going. No range anxiety!! The best of both worlds - battery powered driving and the ability to go far beyond the battery range should the need arise.