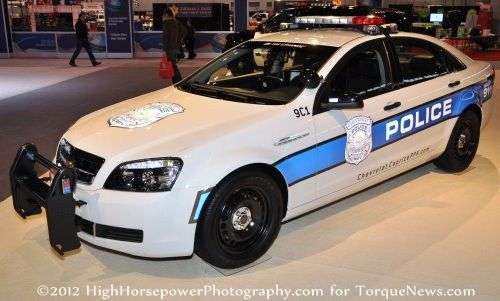 General Motors has just announced that when the 2013 NASCAR season rolls around, the many Chevrolet teams in the field will no longer be driving Chevy Impala stock cars – instead racing a new Chevrolet model that has not yet been unveiled to the world.
Advertisement

NASCAR has softened the rules pertaining to exterior race car design and General Motors is the third team to announce that they will have a new car in 2013, after Ford unveiled their next generation Fusion stock car earlier this year followed by the 2013 Dodge Charger Sprint Cup car debut last weekend. Like the 2013 Fusion and 2013 Charger Sprint Cup cars, GM says that the new 2013 Chevrolet NASCAR Sprint Cup car will offer more physical characteristics of the road-going car that bears the same name as the race car but unlike the Ford and Dodge models that stuck with the same models that they are currently running, GM will not be using the Impala for the 2013 car.

While GM has made it crystal clear that the Chevrolet Impala will not be the NASCAR Sprint Cup car for 2013, the company has provided very few details around just what vehicle they will use next year. The one key fact that GM did state was that the 2013 Chevrolet Sprint Cup car will be based on a nameplate new to the brand’s lineup that will also be available for public sale; meaning that the new car will not be based on the Cruze (which is raced in Europe), the Malibu or the Camaro.

"We are keeping the wraps on the new car for now and will continue to prepare for next season by testing camouflaged vehicles," said Jim Campbell, vice president, Chevrolet Performance Vehicles and Motorsports. "We know that Chevrolet fans are eager to see the new racecar and we hope that the prospect of being able to own one just like it will make the wait a little more bearable."

There have long been rumors that the vehicle formerly known as the Pontiac G8 in the US would resurface as the new Chevrolet Caprice. The Caprice has already surfaced in the US with the similar Zeta Platform architecture to the Pontiac G8 (more commonly known outside of the US as the Holden Commodore) with the new Caprice PPV (shown above on the right), bringing back the rear wheel drive, V8-powered Chevy sedan to the US market. This very well could be the vehicle that replaces the Impala for the 2013 NASCAR season but technically, the Caprice isn’t a new nameplate since it existed in the past as a standard production model along with being available currently as a police vehicle.

If you look at the recent lineup of new Chevrolet brand names, you will see that there aren’t many “old school” names that have been brought back for modern vehicles. Names like the Impala, Camaro and Malibu have been around forever but the newest models – the Cruze, the Volt, the Sonic and the Spark – all have jazzy new names that make no reference to the Chevys of yesteryear. Perhaps this new vehicle, which is slated to hit the US market in mid-2013 as a 2014 model year vehicle while also serving as the 2013 NASCAR Sprint Cup car, could have a name never before seen in the Chevy lineup.

TorqueNews will keep an ear to the ground – listening for any news on this subject and bringing it to you as soon as it breaks!

amber williams wrote on March 18, 2012 - 2:05am Permalink
Maybe it will be a car a cross between the camaro and the vette maybe its the Trans Am by GM?? theres been plenty of protypes of it around but probably not just a hopeful thought
we need usa car wrote on March 19, 2012 - 9:57pm Permalink
WE need to keep lobbying and emailing GM and nascar to ensure the new car is actually built in north america - and not just imported from elsewhere. What a shame if north america can't even make cars for north american racing- contact gm and tell them what you think