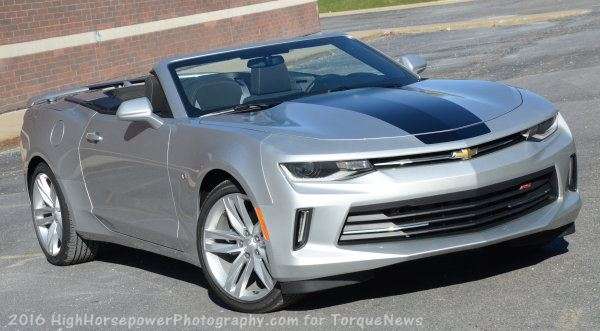 General Motors is looking to spur sales of the new Chevrolet Camaro and one interesting approach taken by the automaker is to offer owners of a Ford Mustang a “conquest” discount of $2,000 on a 2016 Camaro or $1,500 on a 2017 Camaro – and the Mustang owner doesn’t need to trade in their Ford to get this discount on a new Chevy muscle car.
Advertisement

Chevrolet Camaro slows over the course of the first half of 2016 have been much slower than I expected and while GM hasn’t made an official statement on the topic of slow sales, it doesn’t take an industry expert to understand that GM doesn’t like seeing the Ford Mustang and Dodge Challenger outsell the Camaro month after month.

Having driven the 2016 Camaro, I honestly can’t wrap my head around the fact that the new model isn’t comfortably outselling the 2015 model, but in polling a large group of Camaro fans and owners, many of them find the 2016 prices to be too high. When asked why they haven’t or wouldn’t buy a 2016 Camaro, the vast majority of those folks – many of whom own at least one Camaro – stated the pricing as their biggest deterrent.

Well, it seems that GM was paying some attention to the complaints of their fans, as help improve Camaro sales over the past few months, Chevrolet has introduced different incentive programs to bring down the purchase price. The most interesting is the freshly announced Ford Mustang Conquest Discount, with Chevrolet offering Ford Mustang owners or lessees up to $2,000 off of a 2016 Chevrolet Camaro.

Ford Mustang Conquest Discount
If you are not familiar with the term “conquest discount” used in reference to this Chevrolet Camaro discount for Ford Mustang owners, here is a quick explanation.

In the auto industry, a major metric of a vehicle’s success is “conquest sales”. A conquest sale is a situation when a buyer comes into a dealership to buy a vehicle after having previously owned a direct competitor. A few examples would be a Chevrolet Silverado owner buying a new Ford F150, a BMW owner buying a new Lexus or a Ford Mustang owner buying a new Chevrolet Camaro. These types of sales are important, as they show that the given vehicle was good enough to sway an owner out of their previous vehicle and into a new one from another company. More importantly, when someone driving a Silverado, a BMW or a Mustang opts for the aforementioned F150, Lexus or Camaro, they are not contributing to the company which got their business when they made their previous vehicle purchase.

A conquest sale adds to a company’s bottom line while taking away from a key competitor, making these shoppers key factors for success in today’s auto industry. This is so key, in fact, that GM is willing to pay Ford Mustang owners as much as $2,000 to buy a new Camaro.

To be exact, anyone who owns or leases a Ford Mustang can drop by their local Chevrolet dealership and get $2,000 off of a 2016 Camaro or $1,500 off of a 2017 Camaro. It should be noted that to get this discount, the Mustang owners or lessees don’t need to trade in their Ford – just prove that they are, indeed, Ford owners.

This discount essentially offers the 2016 Chevrolet Camaro to Ford Mustang owners for the price of the new Ford Mustang. The goal here is to entice those Mustang owners who aren’t particularly loyal to Ford Motor Company to buy a new Camaro instead of a new Mustang. While this likely won’t have a huge impact on muscle car sales, every unit makes a difference in a tight race. The race isn’t tight right now, but with the new 1LE and ZL1 on the way, we should soon see a boost in Camaro sales among those buyers who are focused on premium performance.