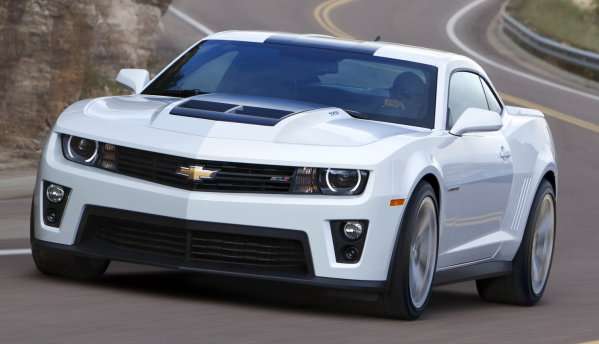 Right now, the entire Chevrolet Camaro lineup (aside from V6 models) relies on an engine based on General Motors’ LS engine architecture. The Camaro SS uses the LS3 (the L99 when mated to an automatic transmission), the Camaro Z/28 uses the LS7 that debuted in the C6 Corvette Z06 and the Camaro ZL1 uses the same LSX V8 that made its debut in the Cadillac V Series lineup. The LS engine series is, without a doubt, one of the most remarkable engine families in the history of the American automobile, but that will all come to an end with the introduction of the new LT engine series.

The new LT engine lineup was first introduced with the 2014 Chevrolet Corvette Stingray and when the 6th generation Camaro arrives in or around 2016 – I fully expect to see the same LT1 that powers the Stingray packed under the hood of the next generation Camaro SS. Beyond that high production V8 model, I expect to see another ultra high performance Camaro and when that model arrives – I expect that it will be powered by either the same engine that powers the 2015 Corvette Z06 or some variation that packs slightly less power than the supercharged LT4 in the new Z06.

GM might rate the next generation super-Camaro as having less power than the Corvette Z06 - which has an estimated 625hp and 635lb-ft of torque – but that depends on the actual power numbers of the 2015 Challenger SRT Hellcat. The Hellcat Hemi is promised to offer at least 600 horsepower and if the Challenger is “only” 600hp, I would expect to see the Camaro come in around 610…just enough to give it bragging rights over the Challenger SRT. On the other hand, should the 2015 Challenger SRT Hellcat pack somewhere in the area of 625 horsepower, GM will have to either market a premium Camaro with more power than the Corvette Z06 – or they will have to let the Chrysler Group retain the title of having the most powerful muscle car in America. Click here for a closer look at the recently announced 2015 Dodge Challenger SRT Hellcat.

Of course, when you consider the fact that the next generation Chevrolet Camaro is a couple years away, GM could most certainly give the Corvette Z06 a bump in power to something like 650. That would allow the Z06 to have more power than the SRT Viper while also making room in the brand lineup for a Camaro with the same LT4 engine with somewhere in the area of 625-640 horsepower.

Unfortunately for Chevy and Dodge performance fans, this battle to be the most powerful muscle car in America is contingent on the next generation Ford Shelby Mustang. The 2014 Shelby GT500 Mustang packed 662 horsepower and 631lb-ft of torque – making it comfortably the most powerful street legal muscle car of all time. In fact, no other American full production car ever – not the Viper or Corvette or anything else – has offered as much power as the current GT500.

However, it is expected that with the introduction of the new S550 Mustang for the 2015 model year will include a new Shelby model that has less power than the outgoing GT500. Realistically, the 662hp offered by the 2014 GT500 is really pushing the limits of safety for a production car so it seems unlikely that Ford would try to rival that monster right away. Should Ford go with something that is less powerful while being a more complete performance car, the Mustang could bow out of the battle to be the most powerful American muscle car.

Should the premium performance model of the 6th generation Chevrolet Camaro come a year or two after the introduction of the next gen Camaro (which is expected in 2016), it could be several years before the Camaro is able to really stand toe to toe with the new Hellcat Hemi powered Dodge Challenger SRT. However, when the higher performance LT engines make their way into the 6th gen Camaro…the people at Dodge could have a heck of a fight on their hands.