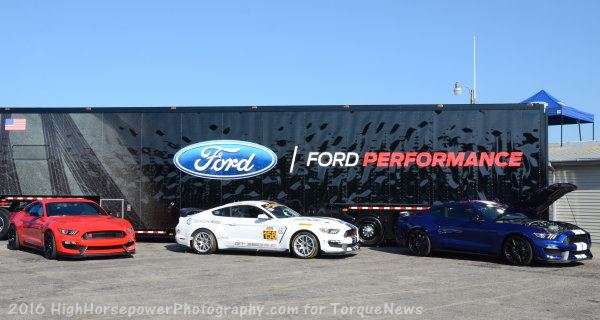 Sales numbers were down across the board in the muscle car segment for May 2016, but the Chevrolet Camaro posted the biggest slide, trailing both the Ford Mustang and the Dodge Challenger as sales of the 6th gen GM muscle car remain inexplicably slow.
Advertisement

For the 5th month this year and the 19th straight month, dating back to November 2014, the Ford Mustang led all muscle cars in monthly sales in May 2016. It was a slow month for muscle car sales, with the Camaro, the Mustang and the Challenger all posting a decline from the same month last year. However, even with the new Chevrolet Camaro being widely available in all of its key forms (4 cylinder, V6, V8 – coupe and convertible) across the country, the new GM muscle car saw the biggest slide in May.

Ford Mustang May Sales
In May 2016, the Ford Mustang moved 10,327 units – down from the 13,616 Mustangs sold in May 2015 and down from the 12,726 Mustangs sold just one month earlier. This downturn in sales comes as a surprise, considering that May 2015 brought about a sales record for the Mustang in this decade, but in the modern auto industry – anything over 10,000 units sold in a month is very good. GM has only sold more than 10,000 Camaros once in the past five years; Ford has sold more than 10,000 Mustangs eight times in the past 15 months.

On the year, the Ford Mustang is down by 6% compared to the first five months of 2015, but with 53,189 units sold thus far, the mighty Mustang has a massive lead in the annual sales race – leading the Camaro by more than 20,000 units.

For the Ford Mustang, things aren’t great…but they are very, very good.

Dodge Challenger Grabs Second Place
The Dodge Challenger is almost always the third place finisher in monthly muscle car sales, but over the past few years, the brawny Mopar muscle car will occasionally jump up into the second place spot. May 2016 was one of those months, with the Challenger’s total of 6,677 units making it the second bestselling car in the segment, beating the Camaro by 850 cars. Although May 2016 was 10% slower than May 2015 for the Challenger, last month was the best month for the high performance Dodge coupe in 2016.

Chevrolet Camaro Sales Drop
The Chevrolet Camaro was once again the big surprise in the muscle car segment, but not for a good reason. With just 5,827 Camaro coupes and convertibles sold last month, Chevrolet posted their worst May sales in the past five years, after May was the best month for Camaro sales in 2014 and 2015.

In May, Camaro sales were down 40% from the same month last year and down 22% from April 2016. Having driven the new Camaro and enjoyed every aspect of it, I am at a loss for words as to why this new Camaro isn’t selling better. The 6th gen Camaro has improved on every aspect of the 5th gen models, yet people just aren’t buying it at the same rate as the previous generation Chevy muscle cars – and that just blows my mind.

I would expect that at some point, General Motors will introduce some aggressive incentives for the new Camaro, which will lead to a spike in sales, but it appears that the new Chevrolet muscle car isn’t going to reach the lofty sales levels of the newest Ford Mustang.

In other words, it looks as though the Ford Mustang is almost guaranteed to win the muscle car segment sales race for the second year in a row.