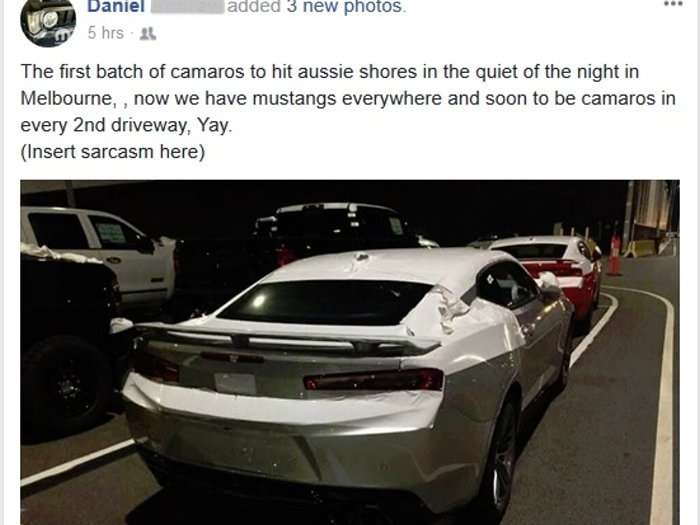 The 2018 Chevrolet Camaro SS is being offered in Australia by the Holden Special Vehicles (HSV) division and based on posts on social media, the first units have arrived Down Under - heading off to the right-drive conversion before being handed over to the buyers.
Advertisement

Last year, we reported the news that the Chevrolet Camaro would be sold by HSV in Australia sometime in 2018. Based on a collection of images traveling around social media, it appears as though the first batch of Aussie Camaros have arrived. They will all need to be converted to right-hand-drive, but once the vehicle has been reconfigured to meet the local laws, the Camaro will be hitting the streets to battle the Ford Mustang.

The Australian Camaro
For those who do not know, Australians drive on the left side of the road (opposite of the US), so the driver’s seat is on the right side of the car. The right-drive configuration is required by law for all new vehicles sold in Australia, so for any new car to be registered, it has to be right-hand-drive. If it is imported with left-hand-drive, conversion to right-drive is required by law before it can be registered and driven on the street and that is the case here.

However, rather than relying on a random third-party importer, Camaro fans will be able to buy the converted muscle car from Holden Special Vehicles. HSV handles the importing, the right-drive swap and the sales of the V8-powered muscle cars.

Speaking of the V8, the Aussie Camaro is only offered in what Americans know as 2SS coupe form, with the standard manual transmission or an optional 8-speed automatic. Other standard features include the Magnetic Suspension system, Brembo brakes, 20-inch wheels, a leather interior layout with the premium infotainment system and Bose speakers.

That sounds great, but coming with all of those standard features leads to a price for the Australian Camaro in the $80k (AUS) range. That is considerably more expensive than the Ford Mustang GT, mainly due to the fact that Ford builds the cars with right-hand-drive while HSV has to incur the costs of the conversion before selling each Camaro.

However, with Australia’s GM muscle car – the Holden Commodore – transitioning to a new, far-less-muscle platform, General Motors fans Down Under are looking for a new performance car. The HSV-prepped Camaro is that car and while it might cost more than the Mustang GT, it offers better performance in almost every area, as was recently proven by the folk at Motor Trend. You can read more about that by clicking here.

In any case, the Camaros have begun arriving in Australia, so once the conversion process has been completed, the American muscle car war will have officially spread to another continent.