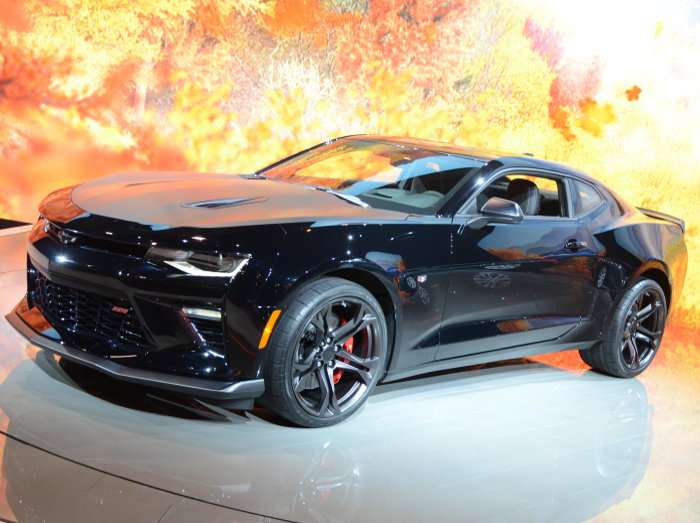 The folks at Motor Trend have released the results of their head-to-head testing of the 2018 Camaro SS 1LE and the 2018 Mustang GT, and surprisingly, the Chevy beat the Ford in every aspect of the competition.
Advertisement

The 2018 Ford Mustang GT is the best-performing volume model of the pony car to date, not including models like the Shelby GT350. As the best Mustang GT ever, it made good sense that it would quickly be compared to the Chevrolet Camaro SS, but I didn’t expect to see the Chevy beat the Ford in every category.

Motor Trend Acceleration Results
The Motor Trend head-to-head testing included a 2018 Chevrolet Camaro SS 1LE and the 2018 Ford Mustang GT with the GT Performance Pack – both of which were fitted with the 6-speed manual transmission. The Mustang packs 5 more horsepower, but the Camaro has 35 lb-ft more torque and the Chevy weighs about 120 pounds less.

The Camaro also had the advantage of the Goodyear Eagle F1 Supercar tires measuring 285mm up front and 305mm out back, while the Mustang rode on Michelin Pilot Sport Cup 4S tires, 255mm in the front and 275mm out back. So, the Camaro has a significant advantage in torque, a slight advantage in weight, a slight disadvantage in horsepower and bigger, sticky tires all around.

When we put it like that, it doesn’t come as that much of a surprise that the 2018 Camaro SS 1LE beat the Mustang GT PP in pretty much every category. The Camaro (based on MT’s price-as-tested) also cost nearly $4,000 less.

Braking Tests
The Camaro beat the Mustang in both metrics that include hard braking, with the SS 1LE getting from 60mph to a stop in 93 feet while the Mustang took 104 feet. In a dash from a stop to 100 and back down to a stop, the Camaro took 13.1 seconds to the Mustang’s 13.6 seconds.

Road Handling Tests
The Camaro beat the Mustang in each of the handling tests as well. The Motor Trend figure-8 test took the Chevy 22.9 seconds with an average of 0.91g while the Ford took 24 seconds while averaging 0.83g. During lateral acceleration tests, the SS 1LE averaged 1.12g to the GT’s 1.00g and on the 1.6-mile road course test, the Camaro turned in a lap time of 1:20.67 – better than 3 seconds quicker than the Mustang’s 1:23.97.

Are you surprised that the Camaro beat the Mustang in every test? Tell us in the comment section below.

Click here for a look at the entire head-to-head comparison from Motor Trend.

chrispy wrote on February 26, 2018 - 4:11pm Permalink
Tire. That more than anything else makes the difference here. The 'stang was on the ropes in the quarter, but almost landed a knockout 5.0 blow above 100mph through the traps (the Camaro must've had an upshift required between 100 & 115), reducing a 0.3 sec. deficit to just 0.1, a split-decision, practical dead-heat.Good to see the advertised power-increase show up at the track for the Ford, which still leads where it counts most: sales. Speaking of seeing, GM might be wise to consider installing actual windows in the Camaro, instead of the current gun-slits; or else make it an all-electric completely self-driving, completely terrifying, all-enclosed fully tank-armored & safety-airbagged 'concept car' demostrator for the '30 Chevy Bolt. Seeing is believing - especially when it comes to believing you won't die while driving at speeds the Camaro is so competent at achieving. ;)