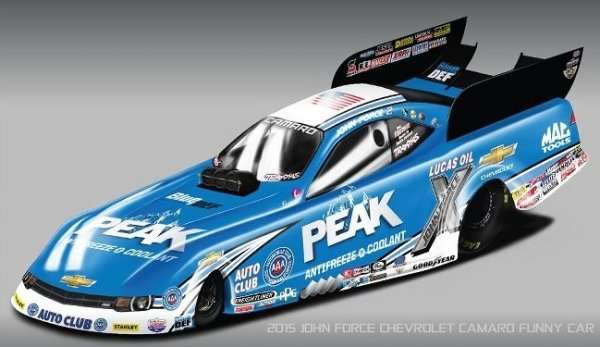 Chevrolet Camaro Comes Back to the NHRA with John Force Racing

It has been announced that the John Force Racing team would be helping General Motors get back into the highest rank of drag racing, as Force, his daughter Courtney and teammate Robert Hight will all race Chevrolet Camaro funny cars during the 2015 NHRA season.
Advertisement

When Ford Racing announced last year that they would be pulling out of their NHRA factory program, John Force was left to find a replacement for his Ford Mustang funny car. The announcement that Ford was pulling out didn’t come as a huge surprise, considering that General Motors pulled out of the pro ranks of drag racing a few years back. This led many to believe that Force would land with either Toyota or Mopar, with the incredible recent success of the Mopar program leading many to believe that Force would be driving a Dodge Charger in 2015.

Well, with today’s announcement we know that General Motors is coming back to the pro drag racing ranks and with the drivers of John Force Racing behind the wheel of three new Chevrolet Camaro funny cars, GM’s return to the NHRA could lead to a championship.

JFR Could Bring GM a Quick Championship
While most first year racing programs at the NHRA funny car level could be painful, General Motors’ return to the Mello Yello Drag Racing Series should be a smooth one, considering the company’s continued performance efforts at other levels and the incredible success of John Force Racing over the past few decades. Keep in mind, while John Force has won quite a few championships behind the wheel of a Ford Mustang, he got his start racing for Chevrolet and he spent time in Oldsmobile and Pontiac funny cars before GM pulled out of the sport a few years back.

“It is great to be back with Chevrolet. I started my career in a Chevy and my plan is to keep racing with them for many years to come. This is a great American company and we are excited about the opportunities in front of us,” said John Force. “I’m going to drive the hell out of that Camaro hot rod.”

Joining Force in the 2015 Chevrolet Camaro funny car will be the other two drivers from John Force Racing – John’s daughter Courtney and former NHRA funny car champ Robert Hight. In 2014, John Force finished 2nd in the hunt for the funny car points championship while Courtney finished 4th and Hight finished 5th so in their first year back, GM has 3 of the top 5 drivers from last season.

Force Doesn’t Get Older – He Gets Better
John Force is 65 years old right now and in most sports, people would question how he could possibly still be competing with drivers half his age. However, since turning 60, Force has won two championships and finished runner-up once so at 65, he is still one of the premium drivers in the series. Since entering the pro ranks in 1979, John Force has won 141 national events, making him the winningest driver in NHRA history. Force has won 16 championships as a driver (also the most in NHRA history) and two as an owner, once for Hight and once for Cruz Pedregon.

Provided that GM can get him a good Camaro body and strong engines, there is no reason that John, Courtney and Robert Hight shouldn’t have a real shot at putting the new Camaro in the winner’s circle more than once this season.

Parks McCants wrote on January 15, 2015 - 5:36pm Permalink
As you know(Racer) their are no Chevy Camaro components in this car. Nonetheless, I wish John a safe and successful season.