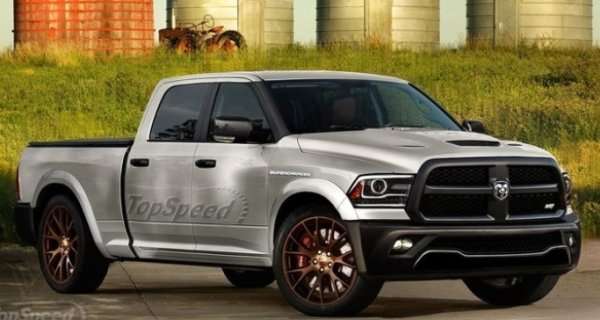 This Challenger-Inspired TopSpeed Ram Hellcat Could Become a Reality

Lovers of high performance pickups are clamoring over the possibility of a Hellcat powered Ram 1500 and thanks to the folks at TopSpeed, we have an idea of what a Challenger SRT-inspired Ram truck might look like if it became a reality.
Advertisement

Now, there are a bunch of “renderings” floating around the internet that depict someone’s idea of what a Hellcat Ram might look like, the image from TopSpeed is the best of the bunch. As they have done so many times, their artists have taken cues from existing models and applied them to a production vehicle, creating a trimline that go-fast truck fans would love to see become a production reality.

The Ram SRT Hellcat
TopSpeed has taken the current 2015 Ram 1500 and added some basic design cues from the Hellcat Challenger, including the gorgeous “brass monkey” SRT wheels and the 3-opening hood. The front bumper has been resculpted a bit and painted a contrasting black, as has the large crosshair grille that also wears the SRT badge. This Ram 1500 also appears to sit a bit lower (which makes sense, since a proper Hellcat Ram would have a sportier suspension setup) and behind the huge wheels, we can see the massive Brembo brake kit from the Hellcat Challenger and Charger.

Of course, what we cannot see in this Ram SRT Hellcat is the engine, which we will have to pretend is the supercharged 6.2L Hellcat Hemi V8. This Ram would send 707 horsepower and 650lb-ft of torque to the rear wheels by means of the same 8-speed transmission that is used in the Challenger and Charger, which would very comfortably make the Ram 1500 the most powerful and the fastest pickup in the world – ever. If we really want to get dreamy, we can pretend that this pickup has a standard all-wheel drive system that would help make the most of that power, at which point we would have a Ram pickup that would eat supercars for lunch.

Unfortunately, this is just a well done rendering and the Chrysler Group has declined to comment on any future Hellcat plans. However, the history of the high performance SRT pickup keeps us all hoping that the SRT Ram could be reborn with the most powerful American road engine of all time.

Could There Be a Hellcat Ram?
A few years back, I had a chance to speak with Ralph Gilles about the possibility of a future SRT Ram. Of course, Gilles wouldn’t divulge any information on future products, so I asked a better question. Does the company see demand for a high performance pickup truck and is there still a market for an SRT Ram?

In the meantime, I would be ecstatic just to see the 6.4L Hemi that is offered in the Ram 2500 listed in the Ram 1500 engine options, as it would make for one incredible truck that could go very fast and do more work than any half ton truck on the market.

Wolfgang Bergstrom wrote on December 9, 2014 - 12:38pm Permalink
if the made a ram hellcat per gilles he said chrysler would do it right so sorry now crew or double cab just a short box single cab as the only one. also such a truck would have the standard 15.4 brembos, but it could have wider tires setting it apart from the traction limited challenger. it will alienate hardcore truck buyers, but who cares its a supercharged 707 horse truck that could annihilate the german suvs.