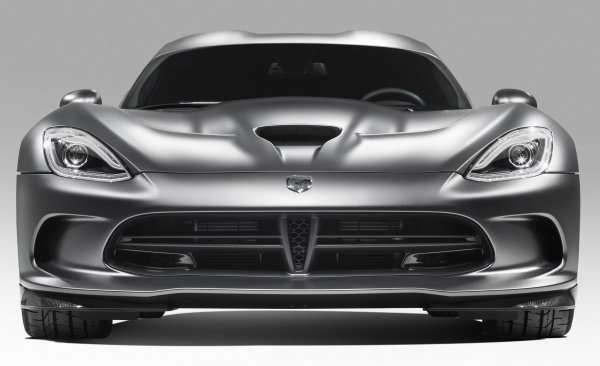 The Challenger Hellcat Hemi Won't Fit in THIS Dodge Viper - Note, This

At the recent Dodge Challenger launch, SRT powertrain boss Chris Cowland was asked about the possibilities of seeing the new Hellcat Hemi under the hood of the Dodge Viper and while he was quick to point out that the blown Hemi won’t fit in this Viper – we have to wonder if there isn’t something spicy coming with the promised 2015 refresh of the Mopar supercar.
Advertisement

It is no secret that the Dodge Viper – or SRT Viper, if you prefer that name – is not selling all that well. While it hit the market in 2013 with a ton of enthusiasm, sales numbers have dwindled to low enough numbers where the company has been forced to repeatedly halt production. Now that the 2015 Dodge Challenger SRT Hellcat has been introduced with 707 horsepower, it seems like common sense that some folks who love Mopar performance and who may have previously purchased a Viper will now opt for the top of the line Challenger that is faster, more powerful and half the price.

Some people believe that the “fix” for the Dodge Viper SRT is to replace the 640 horsepower V10 with the 707hp supercharged Hellcat Hemi. Unfortunately, SRT powertrain director Chris Cowland made it very clear that the new blown Hemi will not fit in the engine bay of this Viper. Interestingly, all of the Chrysler reps who have commented on the possibility of a Hellcat Viper have been quick to specify that it won’t fit in THIS Viper…so what about the next Viper?

Why the Hellcat Won’t Fit in This Viper
While Chris Cowland explaned to the members of the media who were at the 2015 Dodge Challenger launch, more than a few Chrysler reps have stated that the Hellcat Hemi wouldn’t fit in the Viper. Cowland went into far more detail, explaining that the Hellcat’s design with the supercharger on top of the engine was way too tall to fit under the hood while the engine bay area of the chassis is also too narrow to fit the incredibly wide Hemi. You might think that it would be as simple as designing a hood that sits a little higher over the engine, but word on the street is that a hood that is tall enough to clear the Hellcat supercharger will significantly impact the aerodynamics in a negative way. On the other hand, there is no simple fix for the engine not fitting between the portions of the chassis that run along each side of the engine.

What About the Next Viper?
We learned via the Chrysler Group 5-year plan that there is a refreshed Dodge Viper SRT coming sometime in 2015, presumably as a 2016 model year vehicle. I have speculated that it could be something as simple as a minor exterior refresh or perhaps the introduction of the newest Viper Roadster, but what if it is a far more significant refresh?

The Dodge Viper is so wide and low that it is hard to imagine that the chassis around the engine is too narrow to allow the Hellcat Hemi to fit, but that is the case. However, the SRT team could alter the chassis design to make the blown Hemi fit while also adjusting the hood and the aerodynamic layout to make sure that the Hellcat fits under the hood. Mind you, this would be a significant project that would probably put a whole lot of stress on the engineering team, but if it could mean the difference between selling 50 units a month with the V10 or 200 units a month with the Hellcat Hemi – the work certainly seems justified.

Keep in mind, this is all just speculation and there is no evidence that Chrysler has any plans to remove the V10 and install the Hellcat Hemi under the hood of the Dodge Viper. However, it is clear that the company needs to do something to spur Viper sales and there is no question that a more powerful (and presumably less expensive) engine would help bring more buyers to dealerships for the Mopar muscle car.