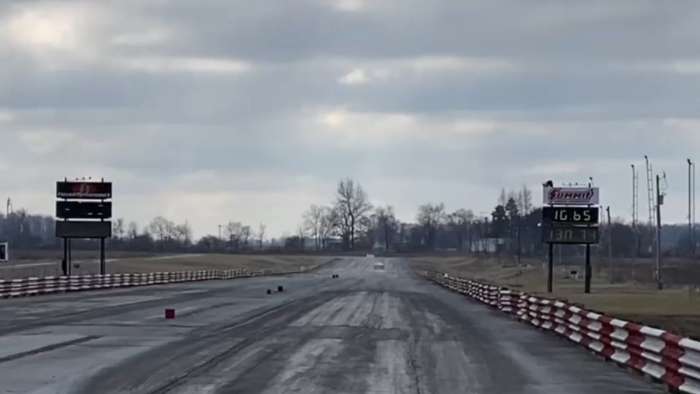 Carlyle Racing Puts the First C8 Corvette in the 10s

Last week we talked about the first C8 Corvette Stingrays being delivered around the country and today, we bring you a look at the first mid-engine Vette to crack into the 10-second quarter mile range, courtesy of the folks at Carlyle Racing.
Advertisement

Last week, we brought you the news that the first 2020 Chevrolet Corvette Stingrays were being delivered to owners around the United States. One of those owners is Mark Carlyle, owner of Carlyle Racing, and upon getting his Sebring Orange Vette, he immediately strapped it to the dynamometer to see how much power it makes at the wheels. After making 440 horsepower and 408 lb-ft of torque at the rear wheels, Carlyle added a drag pack wheel-and-tire package, followed by a nitrous setup with the plans of heading to the drag strip this past weekend.

Both the weather and the growing concerns of the spread of Coronavirus caused many tracks to close, but the crew at Marion County International Raceway in Larue, Ohio opened just for Carlyle Racing and this gorgeous, orange sports car to get some track time. Those efforts paid off, as Marion County played home to the first ever 10-second run by a C8 Corvette, with Mark Carlyle at the wheel. 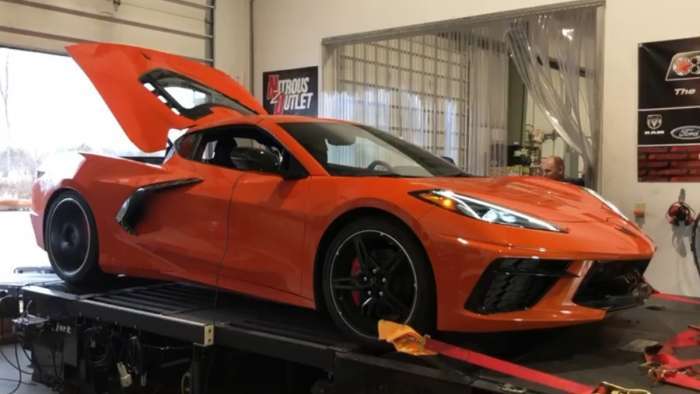 First 10-Second C8 Corvette
This 2020 Chevrolet Corvette Stingray came from the factory with the 3LT trim level, the big rear wing, competition seats and orange seat belts. As mentioned above, in fully-stock form with just 25 miles on the odometer, this C8 made 440 horsepower and 408 lb-ft of torque at the wheels, which is about what you would expect from a mid-engined car with 495 horsepower and 470 lb-ft of torque at the flywheel.

After the dyno run, Carlyle installed a Forgeline GS1R wheel package with 18x5-inch wheels up front and 18x11-inch wheels out back. The rear wheels are wrapped in 305/40/18 Mickey Thompson ET Street S/S drag radial tires while the front tires are Mickey Thompson Sportsman SR measuring 26 inches by 6 inches. He also installed a Nitrous Outlet dry kit, piping the power-adding gas via a plate between the throttle body and the intake manifold. 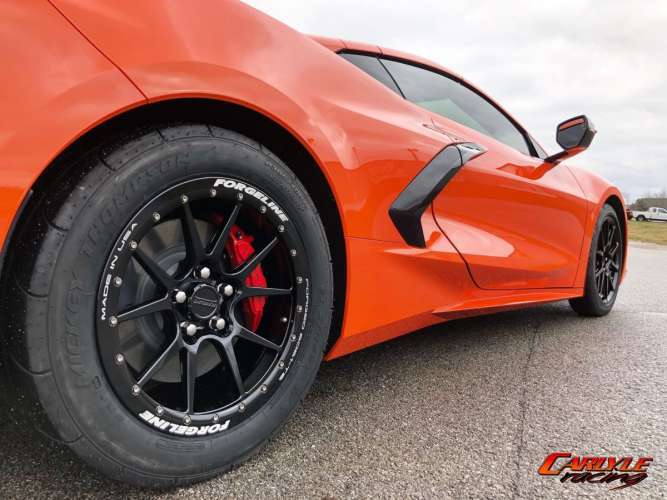 Once the wheel-and-tire package was installed along with the nitrous oxide, Carlyle headed to Marion County International Raceway to make the most of the cold air. He made some gentle runs, feeling the car out and running in the mid-to-high 11s before running in the low 11s without the nitrous. When the nitrous setup was engaged, an extra 50 horsepower helped set the first major record for the C8 Corvette. Carlyle ran a series of 10-second quarter mile passes, eventually settling at a best time of 10.65 at 130mph with a density altitude of -987 feet with a light tail wind.

Even Greater Potential
Keep in mind that the engine computer of the LT2 in the C8 is still locked, so there was no engine tune to accompany that nitrous oxide, hence the relatively small shot. The engine computer is clearly self-adjusting to handle the nitrous, but with a tune, we can expect a C8 with a small shot of nitrous to run even quicker. 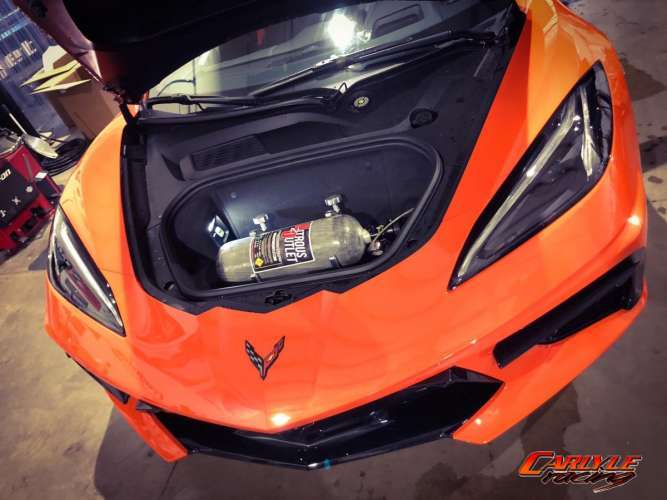 However, for the time being, Mark Carlyle has the quickest C8 Corvette in the world with a time of 10.65, while also being the first C8 owner to crack into the 10-second range. While Carlyle had great air and a tail wind, these runs were made on a cold track, yielding 60-foot times in the 1.8-second range. Once they get this car on a warm track, we can expect better short times and better elapsed times on the big end.

DeanMcManis wrote on March 17, 2020 - 1:29am Permalink
Considering that the stock C8 Corvette can do the 1/4 mile in around 11.2 seconds or so, it doesn't seem like a huge jump to get it into the 10s with drag radials and nitrous. With that said, [email protected] is impressive. Also I think that it is smart to run a smaller dry shot of nitrous with this brand new, stock, Corvette. It could probably handle a 100 shot, with the computer making sure that the fuel mixture doesn't go lean. But that is one of the better points of nitrous is that you can swap out the pills to add or remove power. And it is always smart to start out on the conservative side, especially with a brand new car. Especially if it is already taking you into the mid 10s with mild mods.