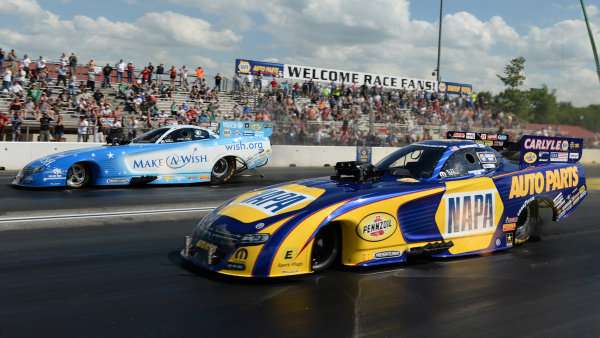 The Dodge Charger funny car teams of Don Schumacher may have gotten off to a slow-ish start for the 2016 Mell Yello Drag Racing Championship series, but this past weekend in New England, Ron Capps gave DSR and Team Mopar their third straight win in the third straight all-Dodge funny car final round.
Advertisement

After Don Schumacher Racing’s quartet of Dodge Charger funny car drivers started last season with 5 wins in the first 6 races, it was expected that they would come out flying for the 2016 season. They did at first, with Ron Capps taking home the Wally in this season’s opening event, but the DSR Charger drivers were forced to watch Ford, Toyota and Chevrolet teams take the next 5 wins. However, since Courtney Force took her Chevrolet Camaro to victory at the Spring Nationals in Texas, Dodge has dominated the funny car class. In addition to three straight top qualifiers in each of the past three events, the DSR teams have been the only funny cars to reach the finals – setting up Dodge versus Dodge battles for the win at the Southern Nationals, the Kansas Nationals and now the New England Nationals.

Qualifying
Once again, the Don Schumacher Dodge Charger funny car teams came out flying at the New England Nationals, with Ron Capps laying down the quickest run of his career with a 3.865 at 325.92 miles per hour. This set a new track record for New England while ranking as the second quickest funny car run of the 1000-foot era. Following Capps, Tommy Johnson Jr was 2nd, Jack Beckman was 3rd and Matt Hagan was 5th.

In the 2nd round of qualifying, Capps went 3.88 (slower than round 1), but no one was able to beat his previous 3.86 either. Hagan jumped up to second while Beckman and Johnson relied on their 1st round runs as well, slipping to 6th and 3rd, respectively.

Literally every single funny car driver ran slow in the 3rd round of qualifying and while some drivers would jump up a spot or two in the 4th round, all of the DSR Dodge Charger teams held onto a previous run for the best of the weekend as they headed into the elimination rounds.

That meant that Ron Capps and his Dodge Charger were in the top spot, followed by Matt Hagan and Tommy Johnson Jr, while John Force and his Camaro were the highest qualifying non-Dodge team. Jack Beckman and his Mopar monster were the “slowest” of the DSR team, starting in the 6th spot.

In round two, Ron Capps turned a small starting line advantage into a big win over Courtney Force and Tommy Johnson Jr narrowly beat Jack Beckman while Matt Hagan lost to 2015 Champion Del Worsham and John Force knocked off Tim Wilkerson. Tommy Johnson Jr and Ron Capps both ran a 3.956, tying for the quickest run of round two.

In the semifinals, Ron Capps had lane choice over John Force and although Force’s new Camaro got away first – Capps ran him down on the big end for the win. On the other side of the bracket, Del Worsham also watched a starting line advantage evaporate at Johnson slipped past shortly before the finishing line. This set up the 3rd straight all-Mopar final round and, get this…Capps and Johnson both ran a 3.926 heading into the finals.

In the finals, Tommy Johnson Jr had a slight starting line advantage, but somewhere near the halfway point of the blistering fast race, Ron Capps took the lead and drove to victory.

This marked Capps’ 2nd win of the 2016 season and Don Schumacher Racing’s 4th of the year through the first 9 events.

Championship Run
While the DSR teams still have some catching up to do, it appears as though the team of Capps, Hagan, Johnson and Beckman has caught their stride this season – blasting through the competition week after week, just like they did last season.

Courtney Force still leads the funny car standings, but Jack Beckman is now just 15 points back in 2nd and Ron Capps is only 22 points back in 3rd. Hagan now sits 6th and Tommy Johnson Jr is 9th.