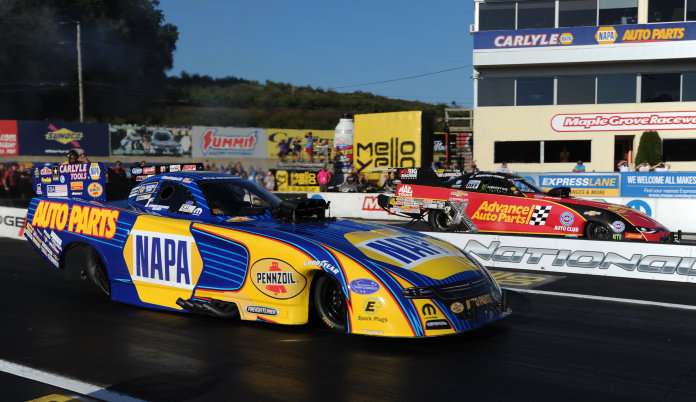 Ron Capps and his Don Schumacher Racing Dodge Charger funny car took the class win this past weekend at the Dodge NHRA Nationals in Pennsylvania, beating the Chevrolet Camaro of Courtney Force for his 7th win of the season and moving him into 1st place in the championship run with just four races left.
Advertisement

This past weekend, the NHRA funny cars headed to Maple Grove Raceway in Pennsylvania for the Dodge NHRA Nationals, which is the 2nd leg of the 6-race Countdown to the Championship portion of the season. After dominating the early part of the season, the Don Schumacher drivers went into the Countdown on a winless drought and that continued for the 1st race of the actual championship run, but at Maple Grove, the Mopar drivers dominated from beginning to end.

Not only did Ron Capps drive his Charger funny car to victory, but he did so by beating Courtney Force in her Chevrolet Camaro, continuing the season-long battle between the teams of John Force Racing (JFR) and Don Schumacher Racing (DSR).

Qualifying
The Don Schumacher Racing Dodge Charger funny cars came out of the trailer with some urgency, with Jack Beckman turning in the quickest time for the 1st round while Matt Hagan was 3rd quickest, with Robert Hight and his Camaro sitting 2nd. On the other hand, the 1st round of qualifying wasn’t great for the other drivers from JFR or DSR, as they all turned in slow runs on their initial run down the track.

The field got quicker for the 2nd round of qualifying, with Capps jumping up to 3rd behind Hagan in 2nd, but the Robert Hight and his Camaro turned in the new quickest time, moving into the top spot. Beckman dropped to 4th and Courtney Force moved up to 7th.

The top 3 spots wouldn’t change in the final 2 rounds of qualifying, but Jonnie Lindberg moved ahead of Beckman, taking the 4th position while Courtney Force dropped to 8th.

Eliminations
In the 1st round of eliminations, all of the Don Schumacher Dodge Charger funny cars won, with Capps beating Jim Campbell, Johnson beating Alexis DeJoria, Hagan beating Jeff Diehl and Beckman beating Cruz Pedregon. Things didn’t go quite as smoothly for John Force Racing, with Robert Hight and Courtney Force both winning, but John Force lost to Lindberg. Also, the Ford Mustang of Tim Wilkerson and the Toyota of Jonnie Lindberg joined the 4 Chargers and the 2 Camaros in the 2nd round.

In that 2nd round Ron Capps beat teammate Tommy Johnson Jr, Courtney Force beat teammate Robert Hight, Matt Hagan beat Wilkerson and Beckman beat Lindberg – leading to a semifinals round made up of 3 DSR Chargers and a single JFR Camaro.

In the 3rd round, Courtney Force took on Jack Beckman and in the 1st JFR-DSR battle of the Dodge Nationals, the Dodge slept at the starting line and the Camaro took the win. Although Beckman had the quicker run, his reaction time was slow enough that Force took the win. In the other half of the semifinals, Capps pulled the starting line advantage over teammate Hagan and he turned in a quicker run as well, allowing him to advance to the finals for the 10th time this season.

The final round at the 2017 Dodge NHRA Nationals marked the 6th time this season where a John Force Racing Camaro took on a Don Schumacher Charger in the final round, with DSR having a 3-2 lead before this matchup between Ron Capps and Courtney Force. Capps once again took the holeshot advantage and he never looked back, beating Force soundly on a strong run by the 10,000hp Dodge Charger.

The Championship Run
With his 7th win of the 2017 season, Ron Capps has now moved into the top spot in the race for the championship with just 4 races left on the schedule. Capps is just 8 points ahead of Robert Hight while being 39 points ahead of Courtney Force, so the DSR Charger has a pair of JFR Camaros nipping at his heels. After Force, Hagan is 4th, Beckman is 5th and Johnson is 6th while John Force is in 8th.