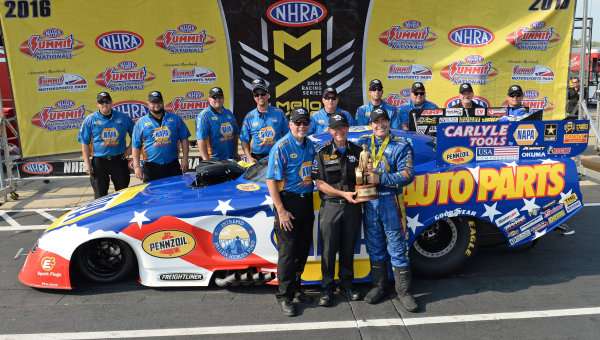 Ron Capps and his Don Schumacher Racing Dodge Charger R/T funny car kept the momentum rolling this past weekend in Ohio as Capps beat Courtney Force for his 4th win of the season and his 3rd win in the past four races.
Advertisement

The 2016 NHRA drag racing season didn’t start out the way that the Dodge Charger drivers from Don Schumacher Racing had hoped, with just a single win in the first six races of the season, but with Ron Capps’ win this past weekend in Norwalk, Ohio, the DSR Chargers have now won six straight races – asserting similar dominance to what the Mopar-based teams displayed during the 2015 season.

Qualifying
Once again, the Don Schumacher Dodge Charger funny cars came out flying in qualifying, with Ron Capps grabbing the top spot, followed by Matt Hagan in 2nd, Tommy Johnson Jr in 4th and Jack Beckman in 7th. Oddly, in the 1st round of Norwalk qualifying, all of the cars in the top seven were either Dodge Chargers or Toyota Camrys, as the John Force Racing Chevrolet Camaro teams struggled early on.

That would change in the 2nd round of qualifying, the both Robert Hight and Courtney Force laid down quick enough times to climb into the top 5 while 2015 funny car champ Del Worsham and his Toyota snatched the top spot away from Ron Capps. Capps turned a better time in round two, but it wasn’t enough to topple Del, so after the 2nd round of qualifying, Worsham was in the top spot, followed by Capps, Hight, Courtney Force, Jack Beckman and Matt Hagan. That is Toyota, Dodge, Chevy, Chevy, Dodge and Dodge in the top six spots.

The 3rd and 4th rounds of qualifying at Norwalk saw the top portion of the order remain the same, with literally every driver turning in a slower time in round #3 while round #4 saw only those drivers at the bottom of the ladder improve their times or positions. Because of this, Del Worsham and his Toyota claimed the top qualifier title for the Summit Racing Equipment Nationals, followed by Capps in 2nd, Hight in 3rd, C. Force in 4th, Beckman in 5th, Hagan in 6th, Cruz Pedregon in 7th and Tommy Johnson Jr in 8th.

Eliminations
There were only 15 cars in the funny car field in Norwalk, so in round one, top qualifier Del Worsham got to make a free pass in his Camry. From the Mopar camp, Tommy Johnson Jr beat Tim Wilkerson and his Mustang and Ron Capps knocked out Jeff Diehl while Matt Hagan lost to John Force and Jack Beckman lost to Alexis DeJoria. Courtney Force turned the quickest time of the surprisingly slow 1st round while beating John Hale.

Based on qualifying in the 1st round of eliminations, the Norwalk event was the worst in the past six for Don Schumacher Racing, but things got better as the day went on.

In the 2nd round, Tommy Johnson Jr took on fast qualifier Del Worsham, but when the Dodge grabbed the starting line advantage and laid down the quickest run of round #2, the Toyota never had a chance. Also, although Ron Capps watched Cruz Pedregon take the starting line lead, Cruz ran into issues and Capps drove to victory. On the other side of the bracket, Courtney Force beat Alexis DeJoria and in a battle of JFR Camaros, Robert Hight beat his boss, John Force, to advance to the final four.

In the final four, the funny car class had a pair of Dodge versus Chevy matchups. For the Don Schumacher teams, it was a chance to set up the 6th straight Mopar-Vs-Mopar final while Force and Hight hoped to set up an all-Chevy final round. Neither team would get their wish, as Tommy Johnson Jr could only watch Courtney Force race away when he lost traction while in the other pairing, Ron Capps turned a massive starting line advantage into a thorough beating of Hight’s Camaro.

This set up a final round battle between Ron Capps and Courtney Force. John Force Racing versus Don Schumacher Racing. Dodge Charger versus Chevrolet Camaro.

The Finals
In the final round, Ron Capps had lane choice after turning the quickest time in the semifinals, but when the green lights dropped – Courtney Force blasted out to a small advantage. Both funny cars laid down solid runs, but Capps’ Charger barely edged ahead at the line for the win.

As mentioned above, the win in Norwalk marked Capps’ 4th on the season and 3rd in the past four events. For Don Schumacher Racing, this was the 6th win in a row and the 7th on the season.

After the Norwalk event, there are six races remaining before we head into the six-race “Countdown to the Championship” period, where the points are essentially reset in order to prevent the Don Schumacher cars from running away with the title.