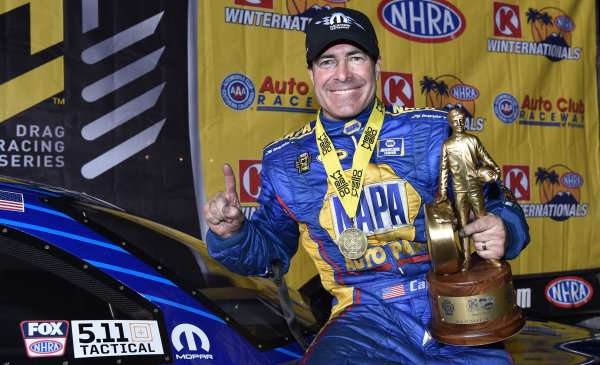 Ron Capps and his NAPA Dodge Charger started off the 2016 NHRA drag racing season with a big win over 2015 champ Del Worsham, while Fast Jack Beckman earned his nickname as he once again turned in the fastest run of the entire event with a 3.888 at 326.16 miles per hour.
Advertisement

When Del Worsham and his Toyota Camry won the 2015 NHRA funny car championship, he ruined a season-long party that was the total domination of the class by the Dodge Charger race cars from Don Schumacher Racing. The DSR quartet of Ron Capps, Matt Hagan, Jack Beckman and Tommy Johnson Jr crushed the competition for the first 18 races of 2015, taking home the win in 14 of those races. Unfortunately for the Mopar camp, only Jack Beckman could manage a win during the 6-race championship shootout and in winning 4 of those six races, Del Worsham took home the 2015 funny car title.

This was a major disappointment for Don Schumacher Racing, the Dodge Charger team drivers and the faithful Mopar drag racing fans, but DSR came into the 2016 season looking to erase that disappointment. We are only one race into the lengthy NHRA season, but the 10,000 horsepower Dodge Charger and the DSR drivers have picked up right where they left off last year – dominating both qualifying and the eliminations rounds of the 1st race of the season.

Qualifying
The 2016 NHRA season officially began this past Friday, when qualifying for the Circle K Winternationals kicked off in Pomona, California. After regularly topping the qualifying list in 2015, the DSR Dodge Charger teams looked to lay down top times when they first hit the track for the 2016 season. However, the Chevrolet Camaro team cars from John Force Racing had very different plans.

In round one of qualifying, Courtney Force was the first funny car driver of the 2016 NHRA season to break into the 3-second range – running an awesome 3.949 at 326.87 miles per hour and putting her Camaro atop the qualifying list. A few runs later, teammate Robert Hight laid down a 3.942 at 322mph with his Camaro, moving into the top spot ahead of Force and while both Ron Capps and Del Worsham got into the 3-second range – neither were able to beat the two Camaros.

In fact, while John Force and Jack Beckman both got into the 3s in the second qualifying round, Hight and Courtney Force held the top spots through the first day of funny car qualifying. Even as the teams took to the track for the third round on Saturday, it looked like Force and Hight make hang onto their top spots – until Fast Jack Beckman hit the track.

Lined up against Courtney Force for the final pairing of the third round, “Fast Jack” reminded us why he has that name with an awesome 3.943 second run – launching himself ahead of the Camaros and into the top spot for the funny car class.

During the final round of qualifying, Beckman watched as Ron Capps laid down a time of 3.902 seconds, moving him into the top spot – but Beckman reclaimed his spot atop the list with a run of 3.888 seconds. That would be the quickest run of the weekend for the funny car class and as a result, Beckman was #1 and teammate Capps was #2 headed into eliminations. Robert Hight started in the 3rd spot, Alexis DeJoria was in the 4th spot and Del Worsham rounded out the top 5 with his Toyota.

The only Ford Mustang in the field was Tim Wilkerson, starting in the 8th spot while the Camaros of Courtney Force and John Force started in the 6th and 9th positions.

Eliminations
In round one, things didn’t go very well for the Dodge Charger teams, with five of the seven losing in their first run. Jack Beckman knocked out John Hale, DeJoria beat Campbell, Chad Head beat Matt Hagan, Robert Hight beat Tommy Johnson Jr and Courtney Force beat Gary Densham. All three of the John Force Racing Chevrolet Camaros made it through round one, with Hight and Courtney Force turning in the quickest times of the round.

In round two, Jack Beckman took on John Force and the living legend beat Fast Jack with a better reaction time and a quicker ET – although neither of them got into the 3s. Del Worsham beat fellow Toyota driver DeJoria and Ron Capps used a 3 second run to knock out Chad Head. Finally, the two quickest cars went head to head, with Robert Hight taking a narrow starting line advantage and turning it into a big win over teammate Courtney Force.

In the final four, Ron Capps took on Robert Hight and after the Dodge Charger grabbed a slight starting line lead, we saw our first side-by-side 3-second run of the day. At the line, Capps took the win in a crazy tight race with a 3.938 to Hight’s 3.949.
Over in the other half of the final four, John Force had a solid starting line advantage, but Del Worsham drove around the Camaro and took the other place in the final round.

The Finals
In the final round, Ron Capps and his Dodge Charger went head to head with Del Worsham and his championship-winning Toyota Camry. Capps had lane choice and he used that to his advantage, getting a solid starting line advantage, but as the two went down track, Worsham was closing in a hurry. In the end, Worsham ran a quicker 3.962 second run to Capps’ 3.981, but the hole shot for the Dodge gave the DSR Charger its first win of the 2016 season.