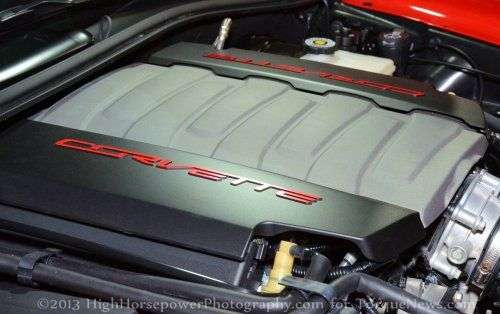 Can the 2014 Corvette-powered Gen 6 Camaro SS compete with the 2015 Mustang? (Updated with official GM figures)

Should the rumors surrounding the 2014 Chevrolet Corvette Stingray and 2015 Ford Mustang GT power ratings all be true, the 6th generation Chevrolet Camaro SS could have a substantial disadvantage in power – leading us to wonder if the next Camaro will be able to compete with the upcoming next generation Mustang.
Advertisement

I should begin by pointing out that the power figures being discussed here for the 2014 Chevrolet Corvette Stingray (see update below) and the 2015 Ford Mustang GT are all unofficial numbers based on suspected leaked information and rumors. We learned this past weekend that the 2014 Corvette will likely have 455 horsepower and 460lb-ft of torque thanks to what appears to be leaked GM documents while insider sources have suggested that the 2015 Ford Mustang GT could pack 475 horsepower. None of these numbers are confirmed by the automaker so they should all be taken with a grain of salt…although the information on both the 2014 Corvette and the 2015 Mustang comes from fairly reliable sources and that is why this whole discussion exists.

Update: When this piece went live this morning, it was based on the leaked numbers of 455hp and 460lb-ft of torque but now that GM has announced the official output for the 2014 Chevrolet Corvette Stingray of 460hp and 465lb-ft of torque, we have revised the piece to reflect the actual numbers. Even with 460 horsepower in the Corvette, my views on this subject havent changed any even though the new Camaro could have slightly more power than we initially speculated. Click here for a closer look at the official 2014 Corvette horsepower and torque numbers.

It is expected that when the next generation Chevrolet Camaro SS arrives for the 2015 or 2016 model year, it will be powered by the same “new” LT1 V8 as the 2014 Chevrolet Corvette Stingray (as shown in the image on the right). In recent history, the Camaro SS and the base Corvette have both been powered by the same engine with the Corvette generally featuring slightly more horsepower. For instance, when comparing the 2013 model year Camaro SS and Corvette base model, both vehicles are powered by the LS3 V8 with 430 horsepower in the Corvette and 426 horsepower in the Camaro SS. Even though the two GM performance cars cater to slightly different audiences, this slight difference in power has been something that the company has done for many years and there is no reason to think that would change with the introduction of the 6th generation Camaro. Should that be the case, the Camaro SS could offer somewhere in the area of 455 horsepower to the Corvette’s 460 horsepower and while this would only be a modest improvement over the current Camaro SS – the decreases in weight through advanced chassis and body design could allow the 6th gen Camaro SS to be quite a bit quicker than the current models. This all seems very much like it would work just fine for GM…until we consider the recently leaked information on the 2015 Ford Mustang.

Two weeks ago we brought you the news via an unnamed Ford Insider who claimed that the 2015 Ford Mustang GT would feature a revamped version of the modern 5.0L V8 with a power output in the range of 475 horsepower. This would mark a fairly dramatic increase over the 420 horsepower currently offered in the Mustang GT but with the GT500 packing a whopping 662 horsepower – a 475hp Mustang GT would leave plenty of room between itself and the top of the line Shelby Mustang. This number does seem a bit high but it also seems to be perfectly feasible and should this figure be close to the real world number, the next generation Mustang will likely offer a substantial advantage in power over the Camaro SS. Ford would also be able to brag about how the inexpensive Mustang GT has more power than the base Corvette (even though the GM 2-seater would likely have an advantage in overall performance).

Realistically, General Motors will not offer up a “standard” Camaro (models like the ZL1 and Z28 not included) that packs more power than the base model Corvette so if the 2014 Stingray really does have a production power figure of 460 horsepower, the 6th gen Camaro SS is pretty much guaranteed to be at or below that number. We know that and Ford knows that…so it is safe to say that Ford also knows that a 475 horsepower Mustang GT would give them a substantial advantage over the Camaro SS unless GM was willing to give both the Corvette and the Camaro a pretty dramatic power increase in order to keep up with the Mustang. Since that doesn’t seem very likely (at least not right away), it looks very much like Ford has made a move that will almost guarantee that in the short run, the next generation Mustang GT is going to have a pretty significant advantage in power over the next generation Camaro SS.

Of course, this is all based on unofficial power figures for the 2015 Ford Mustang GT so things could change quite a bit once official numbers for the next generation Mustang are announced but with the new pony car set to arrive before the 6th gen Camaro and after the 2014 Corvette – Ford has a good chance of reclaiming a big chunk of American buyers who are allured to the vastly more powerful option.

The modern American horsepower war rages on and it just keeps getting better and better.