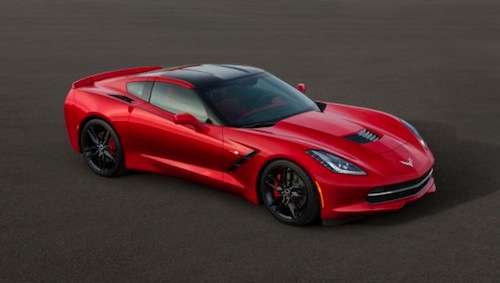 The new 2014 Chevrolet Corvette Stingray C7's final horsepower and torque numbers may be higher than what was originally thought. Did GM leak the new figures?
Advertisement

The new 2014 Chevrolet Corvette has been one of the most highly anticipated sports cars to hit the market this year. The new Corvette Stingray C7 has been unveiled, looked at and dissected by the public and media. When GM announced the coupe and convertible horsepower and torque figures, they told us the new 2014 Corvette Stingray would be the most powerful standard model ever. But Corvette7 has put up a PDF document they say turned up on GM’s media site that show final power numbers that are higher than what was announced by Chevrolet. Just how much higher are they?

Originally, GM told us the the new 2014 Corvette with the 6.2-liter LT1 V8 would have an "estimated" 450 horsepower (335 kW) and 450 lb.-ft. of torque (610 Nm). The PDF document shown by the Corvette7 forum shows a final power rating of 455 horsepower and 460 lb ft of torque. If this is true, the new 2014 C7 will get a nice bump in power and torque over the original estimates. The new numbers are for the Corvette coupe only. The C7 convertible is still showing the original estimates of 450 hp and 450 lb ft of torque. But would GM really have different power figures for the convertible?

GM did tell us the new 2014 Corvette C7 would be the most powerful stand model ever, and it might be more than expected. The new LT1 V8 may have gains of 25 horsepower and 36 lb-ft of torque versus the current car's 6.2-liter LS3 V8. GM has told us the new Corvette C7 will launch from 0-60 in less than four seconds and achieve more than 1g in cornering grip. If it gets this much power gain, it will be the fastest standard Corvette ever.

The all-new 2014 Chevrolet Corvette Stingray C7 shares only two parts with the previous generation Corvette. It incorporates an all-new frame structure and chassis, a new powertrain and supporting technologies, as well as completely new exterior and interior designs. If the PDF files from Corvette7 forum are accurate, we can expect even more power than expected from the new sports car. Stay tuned.