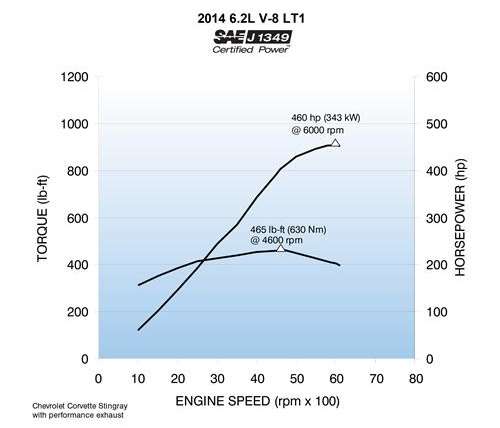 The new Corvette is packing more power than was previously reported. Official tests are in and as the story explains, the results are simply amazing.
Advertisement

The official testing is in and the new Chevrolet Corvette has more power than originally expected. Earlier this week, Torque News Reporter Denis Flierl reported that the 2014 Corvette Stingray would likely come in higher in power than originally hinted at by Corvette. GM released the official figures today and SAE testing of the ‘vette’s LT1 V8 has proven the engine capable of generating 460 horsepower and 465 ft-lb of torque. These figures are with the available performance exhaust system. With the standard exhaust both are 5 less.

These figures make the new 2014 Corvette Stingray the most powerful base Corvette in history. The outgoing 2013 Corvette has “just” 430 hp. Torque on the outgoing car is also much lower at 424 lb-ft. Commenting on the new engine Jordan Lee, Small Block chief engineer at Chevrolet said “The 2014 Corvette Stingray’s LT1 engine is a triumph of advanced technology, delivering more power and torque than ever before with greater efficiency. The LT1’s performance complements the Corvette’s low mass with a tremendous feeling of power that builds as the rpm climbs. Drivers will experience more power and acceleration than ever before with the standard engine – in fact, its power and torque surpass many uplevel engines offered by competitors.”

Indeed a look at the power and torque curves in the photo show just how amazing the torque delivery of the 2014 Corvette Stingray is. At only 2,000 RPM, barely above idle, the Corvette is producing a twisting moment of 400 lb-ft. That same level of twist is available at 6,000RPM. The most comical part of the torque curve is the point at which the torque curve starts. At only 1,000 RPM, which is basically idle, the torque of the 2014 Corvette Stingray has well over 300 pounds. It is worth noting for comparison that a 2013 BMW M3’s V8 engine never exceeds 295 lb-ft of torque at any RPM. That is exactly what Mr. Lee is referring to above in his statement about competitors.

Now that we know the new 2014 Corvette Stingray’s power rating, what should we expect for performance numbers? In its press release today Chevrolet said the Corvette is expected to make the 0-60 mph dash in under 4 seconds. More than likely, much less. While it goes about its business in normal driving the Corvette will also get better fuel economy than its rivals as well. The new 6.2 liter engine uses cylinder deactivation to sip fuel when the engine is not being pressed into action. The larger displacement of the new engine is so large partly so the car can operate effectively in 4-cylinder mode. Direct injection was added to improve performance and also so that the car can operate efficiently and cleanly. The result was a 25% reduction in emissions according to GM.

As Torque News spotlighted in a prior story, the Corvette engine is a meld of the best technologies, old or new, using only two valves per cylinder and push-rods rather than overhead camshafts. The engine is just one of the 5 amazing things about the new Stingray. Sometimes the fashionable way is not always the best way.