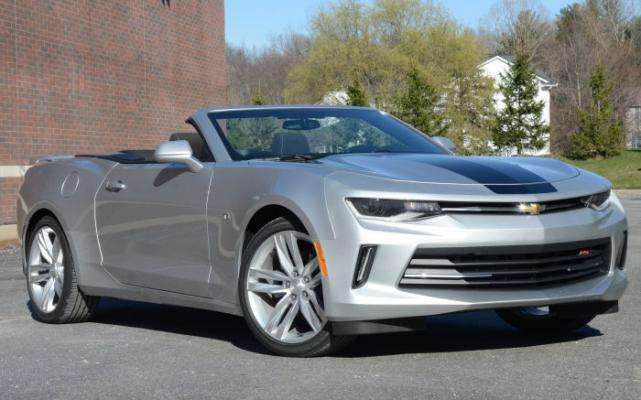 Camouflaged Camaro Test Cars in Milford Point to a Refresh

A variety of Chevrolet Camaro test cars driving around Milford, Michigan with heavy camouflage on the front and rear suggest that GM is working on an exterior refresh – one which could help the company to improve muscle car sales.
Advertisement

Living in beautiful Milford, Michigan has many upsides, but one unique advantage is being a few miles from the GM Proving Grounds. With the automaker’s huge test facility being right up the road, it is not uncommon to see all sorts of GM test vehicles driving past the house and in the past week, there have been a few Camaros in the area with heavy camo on the front and rear ends of the car. These cars are clearly 6th gen Camaros, but the fact that the front and rear are so well disguised all but guarantees that Chevy is working on a refreshed exterior – which could come as soon as 2019.

A Refreshed Camaro Already?
The 6th generation Chevrolet Camaro (shown above) was introduced for the 2016 model year so with the arrival of the 2018n models later this year, the current look of the car is only 3 model years old. In some cases, an exterior refresh in the 4th model year of a popular vehicle like the Camaro would seem a bit early, especially when the company has stuck with one look for longer periods of time with past Camaro models. However, since being introduced for 2016, sales have been slower than most analysts would have predicted.

When the new Ford Mustang and the new Dodge Challenger were both introduced for the 2015 model year, both cars saw the big spike in sales which the companies surely expected from the introduction of new-and-improved versions. In fact, both of those American muscle cars have continued to see stronger sales numbers in this new generation than they did during the previous generation, even a few years into this “new” model.

On the other hand, the Chevrolet Camaro never saw that spike in sales with the introduction of the 6th gen model. Even though the new Camaro offers better performance in every way, better fuel economy and a new, sleeker look, sales numbers for the 6th gen car started low and dropped over the course of the past two model years – generally falling short of the previous Camaro in terms of year over year sales. Even the few good sales months for the 6th gen Camaro haven’t been particularly strong, so it is likely that GM is looking for some way to spark Camaro sales.

A refreshed 2019 Camaro could be what the company needs to drive new buyers to Chevrolet dealerships.

The Mysterious Test Cars
The Camaro test cars running around Milford (which I have yet to capture on camera) look very much like the many 2016-2017 Camaros on the road through the portions which are not camouflaged. The doors, greenhouse and body lines appear to be the same as the current production models, but the front and rear fascia are heavily covered up with the busy black-and-white graffiti – as is the hood. This suggests that the company is working on a 6th gen Camaro with a revised face and tail, likely adding new sculpting and new lighting, presumably with a stronger, more recognizable “signature style”.

While it is hard to guess exactly what GM has in mind for the 2019 (or possibly 2020) Camaro, I would expect a more aggressive front fascia with an overall sportier feel from the base model coupe up to the SS convertible. This may include a hood with sportier lines as well, a bolder, more athletic appearance may appeal to more buyers looking to get into a new muscle car.`

Jesse wrote on May 28, 2017 - 9:00pm Permalink
As a 15 year old, I remember looking into the showroom of my local Chevrolet one night. Little did I know I was looking at the quintessential (for me) Chevrolet Camaro......a 1969 Z-28 in hugger orange. A racer straight from the factory. It elicited emotion from my soul. Envious of an unknown owner who would one day buy the car. And just like that 15 year old, as an adult today, I still can't afford a 1969 Z-28. So why did I flash back to the 60's to begin my commentary? Everybody has a starting point as to why the current Camaro isn't selling. My starting point happens to be that night in 1969. One Sunday afternoon not too long ago, I was on my local Chevrolet lot looking at the "new" 2016 Camaro. Luckily a 2015 Camaro was parked beside it. I kept looking back and forth between the two in order to discern the updates to the 2016. Really??? That obvious a change....ah no, not at all, not even close, nada. A combination of a lack of emotion and a disappointment of things staying the same. So Chevrolet's answer is more of the same. Front and rear fascia change and leave everything in between the same. This aerodynamic styling crap leaves me void of positive emotion. At least with the Challenger, it looks like a Challenger of old. What about the Camaro pays homage to it's roots when it comes to styling?....nothing. So what is my suggestion? As much as I covet that '69 Camaro, look at the 1970 1/2 Camaro's styling. How the fenders and hood look individual, but flow from one contour to the next. The flow of the roofline into the trunk area. And the heck with aerodynamics for once. Go with style that excites the perspective buyer.....for once.