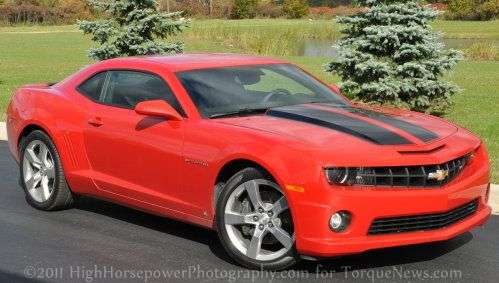 Sales numbers are in for September 2011 and for the 8th month this year, the Chevrolet Camaro has outsold the Ford Mustang, the Dodge Challenger and the Nissan 370Z – continuing the Chevy muscle car’s dominance of the rear wheel drive segment that has gone nearly unchallenged in 2011.
Advertisement

September 2011 was a good month for the Chevrolet Camaro, as 6,994 new bowtie-clad muscle cars left the dealership with a happy new owner behind the wheel. That number accounts for a 10.6% improvement over September 2010 while also providing a 2.5% increase over August of this year. With the win in September, the Camaro has now lead the American rear wheel drive muscle car segment in every month but June when the Ford Mustang managed to break Chevy’s shutout through 2011. General Motors has sold 70,249 Camaro coupes and convertibles in 2011 while Ford has moved just 56,618 units over the same period of time. This difference of nearly 14,000 units may prove to be an insurmountable lead for the Camaro unless Ford pulls out some sort of miracle to massively improve Mustang sales by the end of the year.

The Ford Mustang was the second bestselling muscle car in America last month with 5,054 new models reaching consumers and while second place doesn’t seem so bad; the Mustang posted a year over year and month over month decline in sales. In September 2010, Ford sold 5,760 Mustangs (12.3% more than this September) and in this past August, Ford sold 5,718 Mustang coupes and convertibles so the Ford pony car has declined by roughly 13% since last month. For the year, Ford has sold 56,618 (through the end of September) and while they are pretty much guaranteed to finish ahead of the Dodge Challenger and Nissan 370Z, it looks like the Mustang will have to watch the Camaro lead the US muscle car segment in sales for the second year in a row.

The Dodge Challenger continued to push along in September 2011, posting sales of 3,328 muscular coupes last month – an improvement of 6% over September last year and less than a 1% decline over August. While the Challenger is compared head to head with the Ford Mustang and the Chevrolet Camaro, the price point and sheer size of the Challenger makes it more of a niche vehicle than the two cross-town rivals but Dodge is just fine with that. The Challenger’s sales have never really challenged for the top spot in sales but with incredibly steady sales numbers throughout the year, the Challenger has moved 30,157 vehicles this year.

The Nissan 370Z continued to slide in September 2011, with just 469 new Japanese sports cars sold. This accounts for a 40.4% decline from September last year while also showing a drop from the 517 coupes sold in August 2011. Nissan has previously gotten by compared to the American muscle cars by having a V6 that offered comparable power to some of the American V8s but with the US V8s getting huge increases in power and the less-costly American V6 models now costing less than the less powered 370Z – Nissan can only expect things to get worse for “the Z” unless it gets a boost in power of its own.

Other Muscle Car News:
The Chevrolet Camaro could get a track-only Mustang Cobra Jet fighter
The 2013 Ford Mustang Boss 302 to get new colors, stripes and technology
GM expects most 2012 Camaro ZL1 buyers to pick auto trans
American Muscle builds the first 2011 Ford Mustang V6 in the 11s
TorqueNews review of the V6-powered 2011 Dodge Challenger Rallye
Next Gen Ford Fusion production could save the Ford Mustang facility