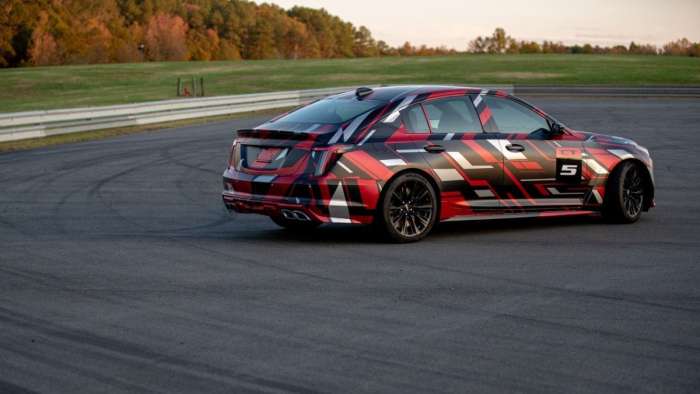 The 2022 Cadillac CT5-V Blackwing will serve as the pinnacle performance sedan for all of General Motors when it arrives in the Summer of 2021, but for now, we get a look at the steering wheel and seat as well as learning of a possible 200 mile-per-hour top speed.
Advertisement

The Cadillac CT5 is the current iteration of the previous CTS and the CT5-V Blackwing is the evolutionary replacement of the CTS-V. Although Blackiwing is the name of a twin turbocharged V8, the CT5-V Blackwing will not feature the Blackwing V8 engine. Instead, it is expected to be powered by the same supercharged LT4 that was showcased in the CTS-V. That engine is expected to deliver 650 horsepower with the buyer’s choice of a 10-speed automatic or 6-speed manual transmission.

Unfortunately, General Motors has been fairly tight-lipped with regard to the Cadillac CT5-V Blackwing since issuing colorful photos of the car, but the automaker has now issued two teaser images of the premium performance interior. When coupled with the uniquely decorated test cars and the expected drivetrain, this car is shaping up to be a real a beast.

Cadillac Blackwing Steering Wheel
First up, we have the steering wheel that will be featured in the Cadillac CT5-V Blackwing, as well as the CT4-V Blackwing. It is wrapped in black hand-sewn leather, with a red stripe at the 12 o’clock position and carbon fiber trim. This unique steering wheel also features a button that allows instant access to the V-Mode, which is the personalized performance driving mode, preset by the driver. Of course, there are also plenty of buttons to make changes to the driver’s information center and the infotainment system. 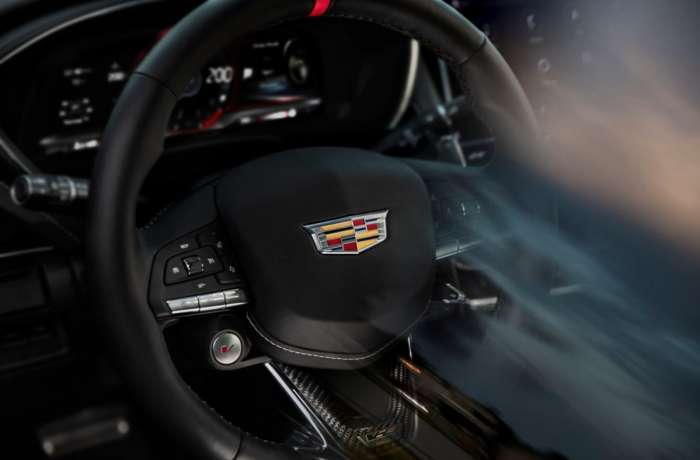 In addition to showing us the Cadillac CT5-V Blackwing steering wheel, we can also see the speedometer in the background. It is reading 200 miles-per-hour, seemingly hinting to the top speed of the supercharged super sedan.

Carbon Fiber Sport Seats
Next, the latest teaser of the Cadillac CT5-V Blackwing shows an extreme close-up of one of the carbon fiber seats. This appears to be the view from the rear seat, looking towards the windshield. Like the competition seats in the Corvette, this seat has a openings that flank the headrest, making it easy to introduce racing harnesses. In the case of the CT5-V Blackwing, the seat structure is made from carbon fiber, which makes it strong, but in many cases, using the stronger materials allows engineers to make the seats a bit thinner. That frees up legroom for rear riders. 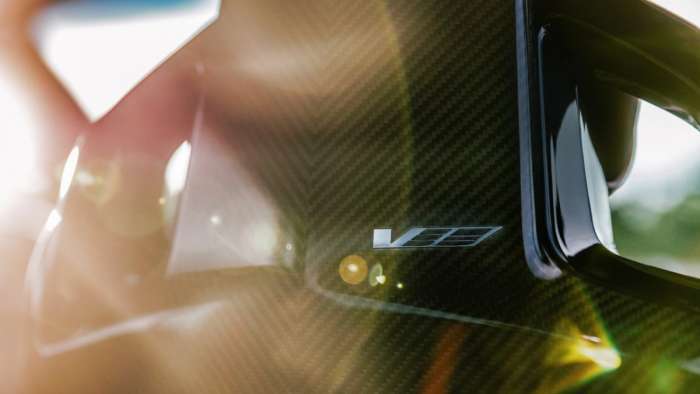 “The carbon fiber seat back will feature a precision book-matched design and laser-etched V-Series logo. The seats will also include other customer-centric innovations and features that will be announced at a later date,” said the Cadillac press release.

The 2022 CT5-V Blackwing is expected to arrive in your local Cadillac showroom in the summer of 2021. The CT4-V Blackwing will arrive around the same time. We can expect more information as time goes on, but with the dealership debut being almost a year away, we are likely to see more teasers from GM.