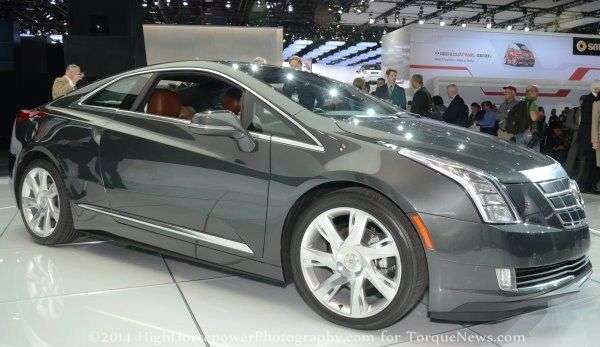 The Cadillac ELR Should Lead to a Chevrolet Volt Coupe

The Cadillac ELR is a 2-door coupe based on the chassis and drivetrain of the Chevrolet Volt and in the next couple of years, General Motors should introduce a 2-door coupe version of the Chevy Volt – a move which could help the industry’s bestselling EV move even more units.
Advertisement

It seems that all of the shot callers in the auto industry feel that the family man is the only person who wants to drive a hybrid or EV which is evident by the fact that pretty much every vehicle in those two segments – the Toyota Prius Hybrid, the Ford Focus and Fusion (both hybrid and electric), the Tesla Model S, the Nissan Leaf, the Chevy Volt, the Hyundai Sonata Hybrid, the Fisker Karma – are all 4-door sedans or family-friendly 5-door models.

While some of them have obvious sporty cues (such as the surprisingly quick Tesla sedan) but there are really very few options for EV buyers who want a sportier 2-door coupe. The only mainstream EV in America that comes in a sport 2-door form is the Fiat 500e but that will change when the new Cadillac ELR hits dealerships later this year. The fact that the Fiat 500e quickly sold out and the fact that GM can confidently charge $75,000 for the ELR shows that there is indeed market demand for a smaller, sportier EV with two doors.

One of the reasons that General Motors has struggled to make money off of the Voltec drivetrain is a combination of the high cost of the electric drive architecture and the fact that there has really only been one option for prospective buyers. If you want to buy an American EV with a range extending motor you are forced to buy the Chevrolet Volt.

The Volt is great, but not everyone wants a 4-door sedan/hatchback – some people want something smaller and sportier like the Cadillac ELR but not all of those buyers want to essentially pay $75,000 for what amounts to a gussied-up 2-door Volt. Some buyers simply prefer the form of a coupe over the sedan/hatchback shape so in only offering the Volt in its current state, some buyers go elsewhere.

Even if the Chevrolet Volt Coupe carried the same $40k-ish price tag as the current models (before incentives, tax credits, etc), some buyers might be more prone to purchase the Volt. When it was only the Volt (before the Cadillac ELR existed), it made no sense for General Motors to develop a 2-door version of the Volt since in all likelihood it will be a low take-rate vehicle.

However, since GM has put the expense into developing the Cadillac ELR as a coupe riding on the Volt chassis and relying on the Voltec drivetrain, the automaker has a coupe version of the Volt in its arsenal. It wouldn’t make sense for GM to introduce a Volt Coupe right now as it would detract some attention from the $75,000 Cadillac but in the next few years, General Motors could offer up a coupe version of the popular Volt. By that point, those who were hot and bothered to get ahold of an ELR will have made their purchase while those folks who want a Volt Coupe will have had a chance to see the ELR out and about.

Those folks probably still won’t want to pay $75,000 for an ELR but a $45,000 Chevy Volt Coupe could bring in a few more new customers to Chevy dealerships – finally offering an attractive option for those who want a sportier extended range EV.

General Motors has an existing coupe chassis that is designed to work with the Voltec drivetrain. There is very little competition in terms of 2-door EVs and there is proof of clear market demand so it is hard to imagine that the next few years will not bring about a Chevy Volt Coupe... and it will be as great as the current Volt in showrooms around the country.

Rick wrote on January 30, 2014 - 5:36pm Permalink
How about a 60 mile Volt? People want performance improvement in newer years...
patb wrote on February 2, 2014 - 5:05pm Permalink
Why not take the Voltec Drive Train and put it into a corvette? Not as much horsepower, but, with the flat torque curve it may do well out of the lights.