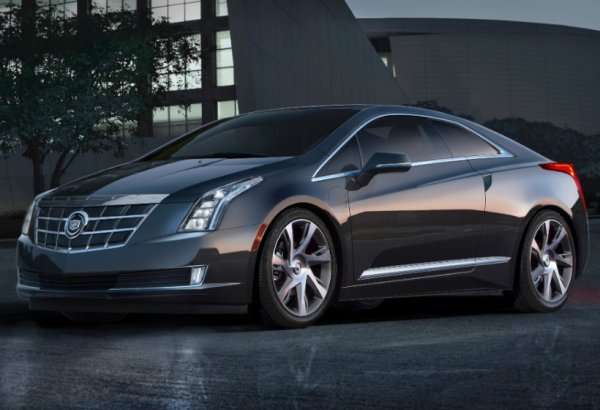 General Motors has just announced the pricing for the 2014 Cadillac ELR and getting your hands on this new super efficient luxury coupe won’t come cheap – with a price starting at $75,995 before any applicable electric vehicle credits.
Advertisement

When the Chevrolet Volt was introduced, many people balked at the suggest of a smaller Chevy sedan with a price tag north of $40,000 so it shouldn’t come as a huge surprise that the 2014 Cadillac ELR – which is essentially a very dressed up coupe version of the Volt – would carry a price that makes it the most expensive car in the 2014 Caddy lineup. The next most expensive vehicle from Cadillac is the Escalade ESV at $71,565 while the most expensive cars in the current lineup are the CTS-V Coupe, Sedan and Wagon with a price of $65,825. The 2014 Chevrolet Volt starts at $34,995 and when you check literally every option box in the Volt build page brings the price up to $40,305 before any EV tax credits or discounts.

The good news is that the 2014 Cadillac ELR will almost certainly be subject to the same Federal tax credits that Chevy Volt owners enjoy and with that climbing as high as $7,500, General Motors is quick to point out that the pricing can effectively drop down to $68,495…which makes the ELR just a couple grand more expensive than the base 60kWh Tesla Model S that has a 208 mile electric range. When you step up to the 85 kWh Tesla, the range increases to 265 miles but it starts at $72,400 while the Cadillac ELR will go around 300 miles on a single battery charge and a single tank of gas – along with endless driving with the range extending gasoline engine whereas the Tesla turns into a paperweight when the battery is dead.

“The ELR is a unique blend of dramatic design with electric vehicle technology capable of total range in excess of 300 miles,” said Bob Ferguson, senior vice president Global Cadillac. “ELR is also unique in that it will be offered nationwide within a luxury customer experience, with proven benefits and care extending from the shopping process all the way through the ownership experience.”

The good news is that while details are very short right now, the 2014 Cadillac ELR that starts at $75,995 will most likely be heavily loaded when it hits showrooms much like the Chevy Volt (that comes pretty much loaded in base form). The ELR will come with a long list of standard features that include the Cadillac CUE infotainment system with navigation, an 8 inch touch screen, a full leather interior with real wood trim, power and climate controlled seats, LED headlights, LED taillights, Lane Departure Warning, Forward Collision Alert, the Safety Alert Seat system, the exclusive ‘Regen on Demand’ feature that allows the driver to help recover energy through the vehicles momentum by using the paddles on the steering wheel. In other words, the 2014 Cadillac ELR carries a big price tag but it will likely come standard with pretty much everything that a buyer could ask for in a modern high end luxury sedan while also offering incredible efficiency.

The 2014 Cadillac ELR electric sports coupe is powered by the same electric drivetrain with a range extending engine as is found in the Chevrolet Volt. This drivetrain allows the ELR to go over 300 miles on a full battery and full tank of gasoline with a pure electric range of 35 miles and an electric mile per gallon equivalent (MPGe) of 82. These are preliminary figures and the actual EPA figures could vary once they are announced but we can expect the Cadillac to offer similar range to the Volt.

There is no doubt that the starting price of $75,995 for the 2014 Cadillac ELR is going to draw some criticism from those who doubt the excellence of the Voltec drivetrain but with one of the most efficient drivetrains available in the luxury segment and every amenity that a luxury car buyer could want – the ELR will surely prove to be worth the price to those buyers who want premium luxury and the incredible efficiency of the Volt.