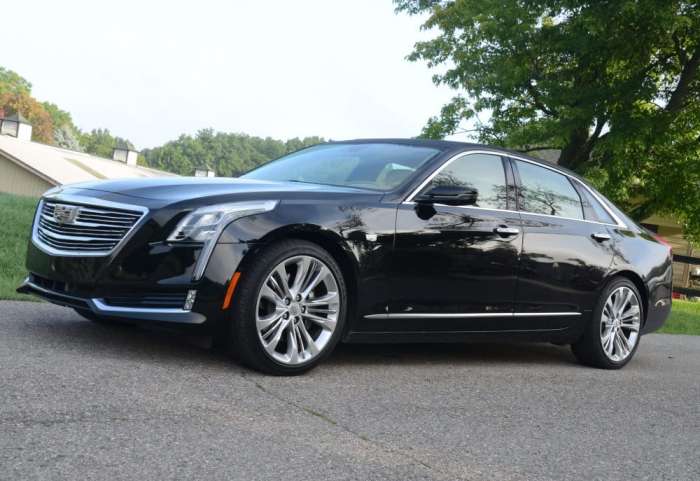 After announcing earlier this week that the Detroit Hamtramck plant where the Cadillac CT6 is built would be “unallocated” sometime next year, the company has confirmed that the CT6 will be discontinued after 2019, but before it races off into the sunset, the twin turbo V8-powered CT6-V will reach showrooms.
Advertisement

The Cadillac CT6 is a remarkable luxury car. After an era of big Cadillac sedans that weren’t much fun to drive – often due to front-wheel-drive – GM’s luxury brand rolled out the CT6 for the 2016 model year. The company rolled everything that they learned from the rear-drive CTS program into one bigger luxury sedan and the results are impressive.

The CT6 has an opulent exterior, a state-of-the-art luxury interior and driving dynamics that blow away any big Caddy sedan that we have seen in years. The CT6 is a proper competitor to the likes of the Lexus LS and the BMW 7 Series with a 3.0-liter twin turbo V6 that delivers 404 horsepower and 400 lb-ft of torque, along with an advanced all-wheel-drive system and a high tech suspension setup. As a result, this big luxury car offers great driving dynamics, rivaling some of the best large luxury sedans in the world.

After years of the CTS being so good only to have the larger Cadillac sedan fall short, GM’s luxury arm finally has a proper, rear-drive luxury sedan that looks great inside and out along with offering excellent daily driver performance.

Best of all, we learned earlier this year that there is a CT6-V on the way. It will be powered by a new twin turbocharged V8 with 550 horsepower and 627 lb-ft of torque. Yes, it falls short on power compared to the CTS-V and other super-premium luxury-sport sedans, but that boosted V8 will most certainly satisfy those buyers who want big power.

Unfortunately, we don’t know exactly when the Cadillac CT6-V will arrive, but we do know that the entire CT6 will be discontinued after 2019. As expected, when production of the CT6 ends at the Detroit Hamtramck plant sometime next year, it seems that production will not start back up.

A Crazy Move
On paper, some people might understand why the CT6 is being killed off. Through the end of the third quarter, Cadillac had sold just 7,270 examples of the big luxury sedan, making it the worst-selling car in their lineup. However, when you look at the fact that the popular CTS has moved just 8,777 during those same nine months, the numbers don’t look all that bad.

Sure, the brand would like to sell more, but the CT6 is a range-topping luxury sedan and across pretty much every luxury brand, their most expensive models are the slowest sellers. With that in mind, it makes less sense to kill the car off due to low sales, but keep in mind that Cadillac has formed the entire future of their brand around the CT6.

The CT6 was the first of the cars to display the brand’s new naming system. As the largest car, the CT6 would be followed by the replacement for the CTS – presumed to be called the CT5 – and the ATS would be the CT4. Cadillac SUVs were the first to follow suit with the arrival of the XT5 and then the XT4, but we have to wonder if this plan will continue with the demise of the CT6.

In any case, General Motors and Cadillac built the CT6 as a flagship that would lead the way for the brand in the coming years and now, after just four model years, it is being killed off. It kind of makes you wonder where the Cadillac brand is headed and more so, it makes many people wonder if the executives know where the brand is headed.

Tiffany wrote on November 28, 2018 - 10:33pm Permalink
I had a feeling the CT6 wouldn't last too long. I want to get rid of mine (2017) only because I just recently had another child and want some extra space. Otherwise, I love the car.
Lakunta wrote on November 28, 2018 - 11:00pm Permalink
I am disappointed in GM! I might be going back to German. They literally have us on their side cheering for them but they don't care. I bought two Cadillacs trying to support the movement and you're going to discontinue them.
Warren Owen wrote on November 29, 2018 - 12:44pm Permalink
Since the CT6 will continue to be built and sold in China it’s still a viable product. It’s built on the Omega platform which could underpin the future XT7 3-Row. I think the domestic CT6 is collateral damage resulting from cancellation of the Chevy Impala and Volt and the Buick LaCrosse. The CT6 is in year four of a typical six year so it makes no sense to relocate production for a couple of more years. It’s better to concentrate on future (Omega) products which could include a true Flagship sedan and SUV not to mention the limousine/car service market. The wonderful Alpha platform ATS/CTS is already evolving into the new CT4/5 which is an altogether different car for a different market joining the XT4/5.
SYD MEAD wrote on December 4, 2018 - 2:44pm Permalink
This it sad news. I am driving my second CT6. The car is remarkable, the front end design is absolutely the most recognizable front on the market and the overall alignment of exterior body components is superb. Cadillac is in business to make a profit for GM, but cancelling this big world competitive model is a disaster foretelling the ignorant market drift toward pick up trucks and SUVs, and indication of the public's unsophisticated taste in vehicles. It is sad. I may have to move over to foreign brands that still offer big luxury models. This may be the last Cadillac I'll own after eleven models since 1961.
Ron Olberg wrote on December 13, 2018 - 11:34am Permalink
I agree with almost ALL the previous posts. In the past 60 years I have owned 8 Cadillacs including a Cadillac XLR. Moreover I have never owned a foreign made auto. But I can say with certainty I will be purchasing a comparable foreign luxury model when I am ready to trade. One must wonder if the same GM bozos were consulting with GE on their future and hastening their likely demise. The GM Board and especially the Chairman better get their heads out of the "progressive" mentality trends and stick with what made the US manufacturer successful in the first place. Being a luxury auto maker, correctly assessing demand, and producing a quality product at a fair price.
Tussell witkop wrote on December 27, 2018 - 10:51am Permalink
Very disappointed Just bought my first Cady for my wife s new XTS4 Love it, beautiful and super right ride. This pisses me off. This is the first GM product I have bought. Back to Ford I guess. No way in hell will I by foreign and I hate ride of them to they are harsh and Tin canny.