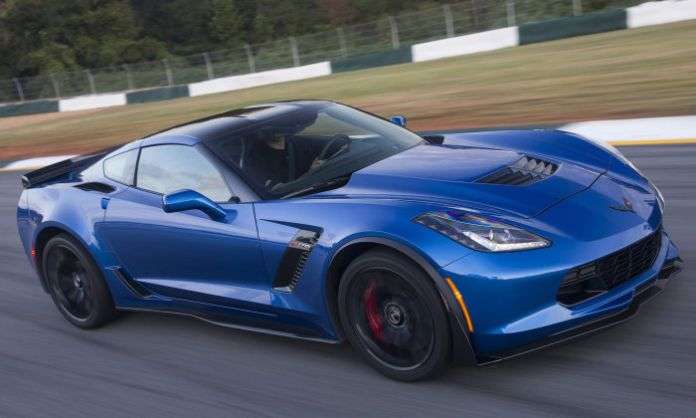 Chevrolet Performance has introduced a new suspension calibration option for select C7 Chevrolet Corvettes from the 2014-2016 model years which will improve handling and ride quality – and owners of these select Corvette models can get this upgrade for just $350.
Advertisement

The C7 Chevrolet Corvette Stingray is the best-performing “base model” Corvette ever and the C7 Z06 is the best-performing Corvette of all time, but Chevrolet Performance has found a way to improve the performance capabilities of C7 models with the Magnetic Ride Control system. With a simple reflash of the computer system which controls the Corvette’s high tech suspension setup, these Chevrolet Performance calibrations improve handling and ride quality – all for just $350.

-The 2016 Corvette Stingray without the Z51 package has calibrations for the Tour, Sport and Track modes.

-The 2015-2016 Corvette Z06, whether it has the Z07 performance package or not, has new calibrations for Tour, Sport and Track modes.

The Chevrolet Performance Magnetic Ride Control calibration upgrade for the C7 Corvette does not include any physical component changes. Instead, the dealership connects to the vehicle’s on-board diagnostic system and “reflashes” the control system for the Magnetic Ride Control system with changes in the programming and settings in the various modes.

In the new Corvette Z06, the Chevrolet Performance calibrations cut more than a second from lap times around GM’s 2.9-mile road course at the Milford Proving Grounds.

Best of all, these plug-and-play upgrades to the ride quality and the handling capabilities of the C7 Corvette are available to owners for just $350 from your local Chevrolet dealership. Once purchased, the owner simply has to stop in to the dealership, where they will connect to the OBD system and update the calibration of the Chevy supercar. Of course, the Magnetic Ride Control calibration upgrade from Chevrolet Performance will not have any impact on the vehicle’s factory warranty, so owners will gain performance and comfort without any concern of losing their warranty protection.

Steven Olsen wrote on October 28, 2019 - 9:54pm Permalink
Has anyone with the upgrade refresh had it revert back to the original one with any other computer changes?