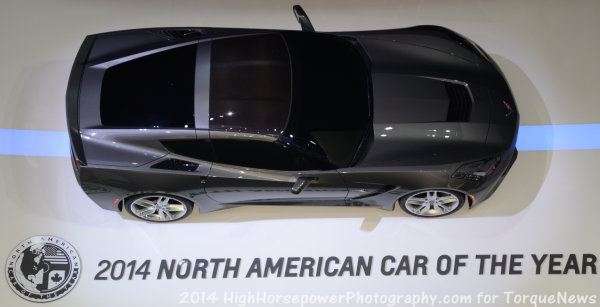 The C7 Chevrolet Corvette is Too Awesome for Korea

The C7 Chevrolet Corvette is being marketed on a global level, but it looks like those prospective Vette buyers in South Korea may not get a chance to buy a new GM sports car in their homeland because government vehicle noise restrictions make the Stingray illegal.
Advertisement

At a recent Chevrolet Track Day held at Yongin Speedway in South Korea, the 2015 Aveo, Cruze and Trax were all on hand for media members to experience the newest Chevy vehicles, but the C7 Chevrolet Corvette was not on hand. While GM Korea president and CEO Sergio Rocha was speaking about the Korean Chevy lineup, he had some bad news for those looking to buy a 2015 Corvette Stingray in South Korea – it likely wont be sold by dealerships.

Too Loud for South Korea
The C7 Chevrolet Corvette Stingray is powered by an LT1 V8 that delivers 455 horsepower with the standard exhaust system and 460hp with the dual mode performance exhaust system. While the high performance exhaust package makes the Stingray a whole lot louder, even the basic exhaust system allows the LT1 to announce its presence on the road in glorious fashion. The new Corvette sounds incredible on the road, but in terms of the American performance car market, the new Corvette with the standard exhaust isn’t all that loud. It still sounds awesome, but it isn't anywhere near as loud as, say, the new Z06. However, in Korea, it is too loud.

The South Korean government has a law that restricts the sound made by new cars sold in the country and, unfortunately, the 2015 Corvette Stingray is too loud to fit within those requirements.

“The launch of the seventh-generation Corvette is being delayed indefinitely due to Korea’s regulation on automobile noise,” said Rocha. “Although such regulatory stance may benefit the industry in the short run, I wonder if that’s something that should be in place for a long time.”

Slow Sales Prevent Further Efforts by GM
When you look at the fact that the Chevrolet Corvette Stingray is in violation of something as seemingly simple as a noise law, it seems like that is a problem that General Motors could solve without a whole lot of fuss. They could work for new legislature or to get some sort of special approval for the Corvette. The company could also work up a new exhaust system for the Corvette that would muffle the engine sounds more adequately for the Korean market. Even if that new exhaust system ate up some horsepower, the C7 Stingray would still be a beat in the South Korean market.

Unfortunately, sales of the Corvette have historically been so slow that it isn’t worth GM’s time to try to get the Corvette approved or to come up with a solution to make sales of the Stingray legal in Korea. Only 12 or so Corvettes are imported to Korea per year, so the costs associated with either pushing for a new law or engineering a new exhaust system would vastly exceed the income from those few sales per year.

Because of that, there seems to be a good chance that the Chevrolet Corvette Stingray won’t be sold in South Korea anytime soon.