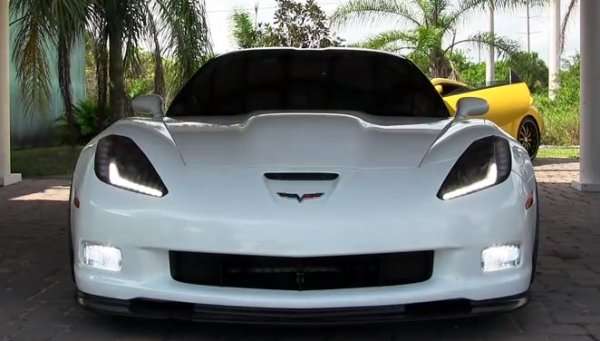 If you are one of the people who loves the look of the new Corvette Stingray front end, but you still revoke the idea of anything other than round taillights on a modern Corvette, meet the Corvette C67 – a C6 Corvette chassis fitted with a customized front end featuring the headlights from the new C7 Stingray.
Advertisement

Since the C7 Chevrolet Corvette Stingray first debuted, there has been some negativity towards the new rear end, which has squared off taillights rather than the round-ish lights that have been found on every other Vette over the past 50+ years. Over time, the negativity about the new rear end has faded, but there are still some hardcore Corvette fans who refuse to accept the new shape to the taillights.

In many cases, the folks who hate the C7 Corvette taillights like the front end so for those people who want the C6 back end and the C7 front end, ExoticVette.com has come up with the C67 – which is literally a C6 Corvette with a specially built front end sporting C headlights, fitted up in a way that looks like factory quality.

Recently, our buddy Michael Berenis of Boostaholics had a chance to check out one particularly wicked C67 Corvette and he detailed the entire experience on video – giving us all a chance to experience this blown custom Corvette while also getting the run-down on what makes this Corvette so unique.

The C67 Corvette
The customized Corvette in the video below began its life as a 2008 Chevrolet Corvette and while it has the Z06 widebody package – it is powered by the early C6 base LS2 V8. The owner has also added an aftermarket hood to work with the C7 headlights and as you can tell from the video, the C6 front fascia has been restyled to accept the lines of the new Stingray headlights as well. Really, when looking at the front end of the C67 Corvette, you might just glance over it as just another C7 even though the lower grille opening is that of the pre-2013 Corvette.

In addition to the revised front end, this white C67 Corvette also has been set up with a supercharged that lifts the output up over 600 horsepower – so not only does this Corvette look like a C7, but it will also very comfortably run with the new Stingrays. The owner has also added C6 Z06 wheels and brakes as well as an aftermarket exhaust system, allowing this customized Corvette to thrive in every measure of performance.

After the owner gives us a quick walkaround of his C67 Corvette, he and Michael jump into the beast for an adrenaline-fueled test ride with cameras inside and outside of the car. Really, the final few minutes of the video just show the supercharged C67 Corvette flexing its muscles from a variety of angles, letting us hear the blower and the exhaust roar as the driver puts the power to the pavement.