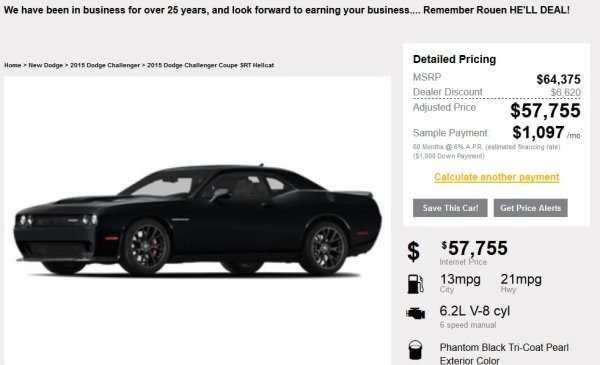 The first examples of the 2015 Dodge Challenger SRT Hellcat are reaching dealerships around the country and one such dealer in northern Ohio is clearly looking to move their 707hp Challenger in a hurry, as they are advertising it online with a discounted price of just $57,755 – almost 7 grand less than MSRP.
Advertisement

Before we had any idea as to what the Chrysler Group would charge for the 2015 Dodge Challenger SRT Hellcat, it was expected that dealerships would add their own markups and drive the price through the roof. When it was announced that the Hellcat Challenger with the manual transmission and no options would have an MSRP starting under $60k, the internet know-it-alls really went crazy, proclaiming how dealerships would be charging six figures for the right to own one of the most powerful American production cars of all time.

While there are dealerships around the country looking to tack on anywhere from $5,000 to $20,000 for their first Hellcat Challengers, some dealers have advertised since Day 1 that they were selling the 707hp Challenger at Chrysler’s MSRP. Frederick was proof that you could get a 2015 Challenger SRT Hellcat without paying a huge markup, but thanks to a link sent over by a friend of mine, some careful shopping could get you into a Hellcat Challenger for well under MSRP.

Get a Hellcat for Under $60k in Ohio
While I have had more than a few people send me links to internet postings for the 2015 Dodge Challenger SRT Hellcat at MSRP – whether it was on a third party site like eBay or just through a dealership website – I have also seen proof of “dealership adjustments” that drive up the price. One dealership in northern Ohio has made a dealership adjustment of their own, but instead of adding a couple thousand onto the price of their Hellcat Challenger, they knocked off a couple thousand.
$6,620, to be exact.

Rouen Chrysler Dodge Jeep Ram of Woodville Ohio has listed their 2015 Dodge Challenger SRT Hellcat on their official company website with an internet price of $57,755.

This particular Hellcat Hemi powered Challenger is finished in brilliant Phantom Black Tri-Coat Pearl and includes most of the available options, including the premium Laguna leather seats, summer high performance tires and navigation. On Dodge.com, a new Challenger configured like the Rouen Challenger would carry an MSRP of $64,375, but the Ohio dealership has knocked $6,620 off of that list price for a discounted figure of $57,755. That is a couple grand less than most of the new Corvette Stingrays sold in the past year. That price is also $45 less than the least expensive Camaro ZL1 (based on MSRP).

So, if you are looking to get into a 2015 Dodge Challenger SRT Hellcat and you would like to stay below the $60k mark for a car that has been loaded up with options, make a call to Rouen and begin planning your trip to northern Ohio. Your best bet is probably to fly into Detroit and find someone to drive you the hour it takes to get to Woodville from the Detroit airport. Even if you have to rent a car to get to Rouen, it will be a small price to pay for a $6,620 discount on the most powerful muscle car of all time.

Click here for a closer look at the posting online and thanks to Lance for the heads up on this!