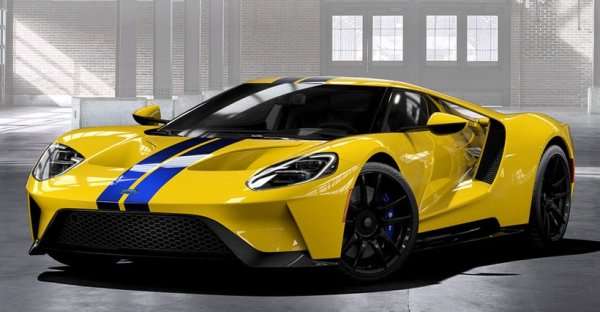 The configurator page for the new Ford GT supercar has gone line on Ford.com, allowing us all to burn a few minutes picking our favorite combination of wheels, stripes and exterior colors, but those folks hoping to buy a new GT will have to apply through the unique purchased process – with only approved buyers getting the green light to take one home.
Advertisement

The 2017 Ford GT is the Motor Company’s first supercar since the last generation GT back in 2006, and while there have been a great many wicked Mustangs over the past decade – the new GT should be the greatest Ford performance car of all time. Unfortunately, we still don’t know how much the 2017 Ford GT will cost, nor do we know how much power will be produced by the new high performance 3.5L EcoBoost V6. We expect a price tag north of $400,000 and power levels north of 600hp, but the company has been surprisingly quiet with the details in the year since the car was introduced.

The good news is that the configurator page on Ford.com for the 2017 Ford GT has gone live, giving us a chance to check out the beautiful supercar in all of its available interior and exterior designs – and there are a bunch.

Build Your GT
When you first enter the “configurator” page for the Ford GT on the company website, you are greeted by a bright white GT in a warehouse setting. Along the left side of the image you have the options of Exteriors, Wheels, Interiors, Series and Reset.

Exterior
When you click on Exteriors, you are given the options of Exterior Colors, Stripes and Front, Rear and Side Lowers Finish. Exterior colors include Frozen White, Shadow Black, Ingot Silver, Liquid Grey, Liquid Blue, Liquid Red, Triple Yellow (shown above), and Matte Black. The only available stripe package is the full length dual stripe, which is available in Frozen White, Shadow Black, Ingot Silver, Alloy, Lightning Blue (shown above), Race Red and Competition Orange. Finally, the lower portion along the front, sides and rear can be Shadow Black, Matte Carbon Fiber or Gloss Carbon Fiber (shown above).

Wheels
When you go into the Wheels section for the Ford GT, you have the choice of 20 inch one-piece forged aluminum wheels and 20 inch carbon fiber wheels. The aluminum wheels are available in graphite, gloss black or silver while the carbon fiber wheels are available in matte or gloss black (shown above). Also, you can pick between Black, Silver, Blue, Red or Orange for the brake calipers.

Interiors
The interior of the 2017 Ford GT is only available in one, fully-loaded layout and the majority of the cabin is black regardless of the package chosen, but the Motor Company is offering four interior color packages which change the color of the dash and the seat bolsters. These packages are named Dark Energy, Launch Control, Light Speed and Re-Entry. Dark Energy is all black (or dark grey), Launch Control adds Competition Orange, Light Speed adds Lightning Blue and Re-Entry adds white.

Finally, the last option in the Ford GT configurator tool is the “Series” tab. When you click that, you get two options that simply say “coming soon”. I would guess that this is where they will offer something like a first edition package or some other special package – perhaps something themed after the current endurance racing program.

Getting One Won’t Be Easy
Even if you have the $400,000 that the 2017 Ford GT is expected to cost, getting one won’t be as easy as walking into your local Ford dealership with a big fat check in your pocket. Interested buyers will need to apply to Ford Motor Company and only those prospective buyers who meet all of the company’s requirements will be permitted to buy a new GT.

Most notably, Ford wants people who buy the GT to actually drive them, rather than people who are going to pack them away as collectables, and the company would prefer that those folks be devout Ford fans. Those folks who bought or who current own a 2005-2006 Ford GT will likely have the best shot at buying a 2017 model, but prospective buyers who have a long history of buying Ford products will also be given a closer look than others. Those interested buyers who have racing experience or proof that they spend lots of time driving a supercar on the open road are likely to get the nod to buy a new GT over someone who doesn’t have much experience daily driving a supercar.

Basically, Ford Motor Company wants Ford fans who have track experience and who like to drive their performance cars on the open road to buy the new GT, and since they don’t want a bunch of these cars wrapped around trees in internet memes, they will probably avoid selling them to rich kids with access to daddy’s bank account.

In other words, unless you are a professional driver or a lifelong supercar collector who drives them on the street, having a half mil to throw around on the new Ford GT might not be enough to secure one.

However, we can all still enjoy the configurator – so click here to burn a few minutes of your day.