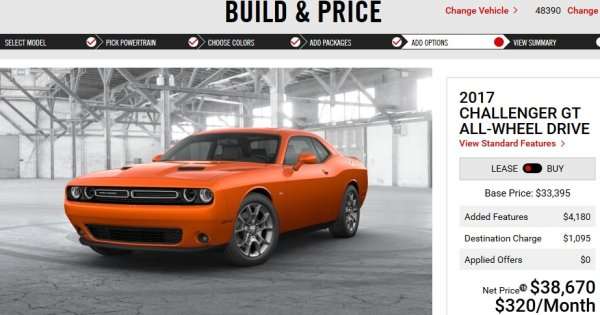 If you have been waiting to build and price the new 2017 Dodge Challenger GT on Dodge.com, your time has come, as the first ever all-wheel drive muscle coupe has joined the rest of the trim lines in the “Build Your Own” section.
Advertisement

When FCA announced their plans to build the 2017 Dodge Challenger GT – the first ever American 2-door muscle car with all-wheel drive – the company offered up the basic pricing for this utilitarian performance car. We learned in December that the Challenger GT starts at $34,490 with destination and we also got some of the option prices, such as the $995 GT Interior Package, so prospective buyers were able to get a rough idea of how much it would cost them to buy one of the AWD Challengers.

Now that the 2017 Challenger GT has arrived in the Build Your Own section of Dodge.com, hopeful buyers can get an exact MSRP for their ideal AWD muscle car.

Building the Challenger GT
The 2017 Dodge Challenger GT has a base MSRP of $33,590, which rises to $34,490 with the unavoidable destination fees. The Challenger GT is available in 13 colors and all but one – Redline Tricoat – is “free”. Redline will cost you $595 extra. In terms of exterior customization, there is a black Challenger body stripe available for $395 and a power sunroof for $1,195.

The only other options for the Dodge Challenger GT are the engine block heater and the spare tire. Oddly, the system forces you to get either the Harmon sound system or the spare tire, so if you price the Challenger GT out with as few options as possible, you can get out the door with an MSRP of $34,685.

If you add the GT Interior Package, the sunroof, Drive Convenience and the Harmon sound system – all of which I would recommend – you arrive at an MSRP of $38,670. Under $40k for an American muscle car with 305 horsepower, a loaded interior and year-round capabilities via the segment’s first all-wheel drive system. No other 2-door car sold in America offers this level of interior appointment, AWD and 300+ horsepower for anywhere near $40k – making the Challenger GT one of the best winter driver options on the market.

Cooleb wrote on February 2, 2017 - 5:08pm Permalink
I'd assume that you sacrifice the spare tire for a large amp on the trunk. 19 speakers, and a 900 watt amp, that amp is proooobably a sizable beast.
Ron wrote on March 1, 2017 - 2:29am Permalink
Let's hope FCA offers the rest of the Challenger models with AWD so Canadian owners and those living in northern US can drive this amazing beast for more than just 6 months of the year. Not all of us can afford to have a $60,000 car or $80,000+ for the 'cat and Demon as a "summer car". Do the right thing and offer the full line up with an AWD option so we can have a blast all year long!