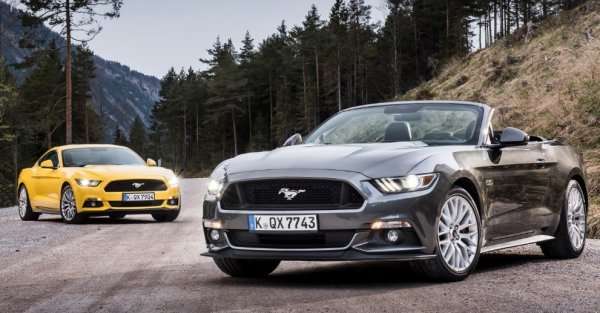 Brits Love the Ford Mustang More than Any Other Sports Car

During the 1st half of 2016, the Ford Mustang is the bestselling sporty car in the United Kingdom, comfortably beating the Jaguar F Type and every other sporty car with more than 250hp in the UK according to Ford Motor Company.
Advertisement

The 2015 Ford Mustang introduced the first generation of the fabled American muscle car marketed on a global level, the markets around the globe have responded well to the arrival of the original pony car. The Mustang has moved to the top of the monthly sports car sales charts in Australia, Germany, India and South Africa, and for the first half of 2016 – the Mustang is the most popular sporty car in the United Kingdom.

Ford Dominates UK Sports Car Sales
Ford Motor Company compiled a list of sporty cars sold in the UK with at least 250 horsepower and based on new vehicle registrations for January 1st through June 30th, the Ford Mustang is the most popular sporty car in the country. During the 1st half of 2016, there have been 2,317 Ford Mustangs registered in the UK, while the Jaguar F Type has just been listed on 1,446 new registrations during that same period.

Third through tenth on the list of the bestselling sporty cars in the UK with at least 250hp includes the BMW 6 Series, Porsche 911, Porsche Cayman, Audi TT, Porsche Boxster, Mercedes Benz SL, Porsche 718 and BMW i8.

It should be noted that the Ford Mustang has a starting price below all of the other vehicles on that list, but the fact that it leads all of those European performance cars proves beyond any reasonable doubt that this new Mustang is a global success.

Brits Want American Muscle
While there have “only” been 2,317 registrations for the Ford Mustang in the UK through the 1st half of 2016, the Motor Company has sold all 4,000 units shipped to the UK this year. Those 4,000 units put just a small dent in the list of nearly 20,000 orders received since the 75 Ford dealerships around the UK began accepting them late last year.

Although the Ford Mustang is offered with the fuel efficient 2.3L EcoBoost 4-cylinder, which also gives it a lower entry price, the vast majority of Brits have opted for the 5.0L V8. To be exact, 70% of Mustang buyers in the UK have opted for the 435hp engine that we get in the Mustang GT here in the US, so it 70% of those 2,317 vehicles registered are V8 models – that is 1,621 units sold. In other words, just the Mustang GT outsold the Jaguar F Type in the UK.

American muscle cars have long been criticized by being too heavily engineered for the US market, with a heavy focus on straight line performance and high power with less concern paid to handling and efficiency. The new Ford Mustang was designed with more emphasis on handling and efficiency without compromising power and straight line performance – and that has led to global success like an American muscle car has never seen before.