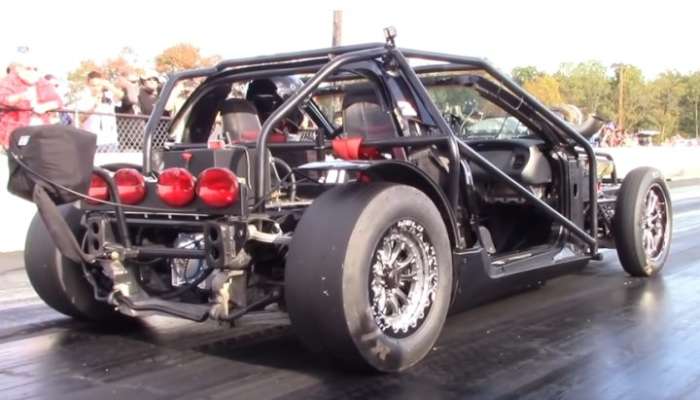 The well-known Corvette cart known as Leroy and driven by YouTuber Cleetus McFarland has become the first General Motors vehicle with a manual transmission to cover the quarter mile in the 7-second range – running a 7.824 at 176.57 miles per hour.
Advertisement

The vehicle shown in the image above and the video below is a salvage-title C5 Chevrolet Corvette owned and driven by Garrett Mitchell, who is better known online as Cleetus McFarland. His bodyless Corvette is named Leroy and over the past year, Cleetus and Leroy have become internet celebrities thanks incredible performance of the car coupled with the impressive driving abilities of Mitchell. Everywhere Cleetus and Leroy go, a huge crowd comes out to watch and at a recent event, the fans watched this C5 Corvette set the world record for the first GM vehicle with a manual transmission to run in the 7-second quarter mile range.

Leroy the Corvette
The bodyless Corvette known as Leroy started its life as an average C5 Chevrolet Corvette that had been wrecked badly enough that the entire body was cut away, at which point Garrett Mitchell purchased it for his YouTube channel. What started off as a project to make a cool Corvette “cart” has transformed into one of the quickest Corvette-based vehicles in the world. In fact, with the run in the 7s, there is no Corvette – body or not – with a manual transmission that has run a quicker quarter mile time, which makes sense since Leroy is the first GM vehicle with three pedals to crack into the 7s.

The stock engine has been replaced with a 427-cubic inch LSX fitted with two gigantic turbochargers, with Texas Speed & Performance handling the build while Fasterproms handled the tuning. The power from that monster V8 is sent to the rear wheels by means of a sequential manual transmission along with a significant amount of suspension work.

Most importantly, Leroy has the “good driver mod” thanks to Cleetus McFarland, and the two have teamed up to set the world record for the quickest quarter mile time by GM-powered, manually-shifted vehicle.

The video below is 48-minutes long, but you can jump to the record-setting run starting around the 36-minute mark. However, if you have time to kill, the video is packed full of great racing action, showing Leroy’s progression into the 7s.