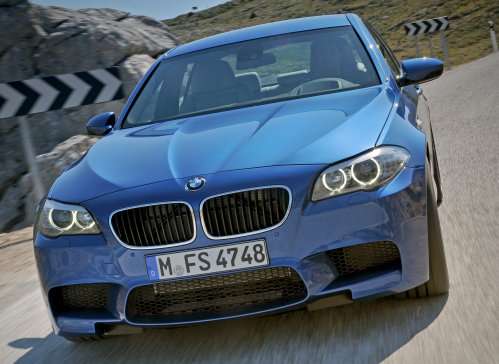 BMW has reportedly issued a stop sale of their high performance 2013 M5 sedan along with the 2013 M6 Coupe and Convertible over a concern that a sudden loss of oil pressure could cause dramatic engine damage – going so far as to contact owners of the new M5 and M6, asking them not to drive their cars until the problem is fixed.
Advertisement

According to the German high performance enthusiasts at M5post.com, this urgent stop sale order was sent to dealerships around the US on September 21st, instructing them to cease sales of 2013 BMW M5 sedans, 2013 BMW M6 Coupes and 2013 BMW M6 Convertibles due to a potential problem with the engine oil pump. These vehicles are all powered by the new twin turbocharged 4.4L V8 (engine name S63TU) which offers a stated output of 560 horsepower and 502lb-ft of torque – although the actual engine output has been found to be much higher. (Click here for a closer look at the actual dyno results of the 2013 M5)

Unfortunately, BMW has found that this monster boosted V8 in the 2013 M5 and M6 could be fitted with a faulty engine oil pump. The company reportedly discovered the problem during quality control procedures that some of the engine oil pumps were incorrectly manufactured and these faulty oil pumps could have their driveshaft separate from the rotor that drives the oil through the system. Should that happen, the S63TU engine will instantly lose oil pressure. While oil pump failure/ a loss of oil pressure is a sure fire recipe for disaster in any engine, having a high performance twin turbocharged engine run out of oil will quickly bring about catastrophic engine failure. Because of this potential risk of engine failure in the event that the oil pump system fails – BMW has asked that dealerships immediately stop selling these new models.

In addition to telling dealers not to sell these new German performance models, M5post.com reports that dealerships are contacting owners of the 2013 BMW M5 sedan, M6 Coupe and M6 Convertible; asking them not to drive their cars until the problem has been resolved. The owners were informed that a flatbed would come to get the car to take it back to the dealership for repairs. BMW told owners that they are currently working on putting together a list of models (by VIN) that are affected but right now, M5 sedans built from July to September could be included in this problem and a all of the notices should be sent to owners by mid October. However, the company stop sale order ends with an ominous bold statement that makes you wonder how quickly this problem will be resolved for those lucky drivers who own the new M5 and M6.

“Do not order any parts at this time.”

Having worked in the dealership world, that last comment leads me to believe that when this bulletin was sent to dealerships, the replacement parts for the 2013 BMW M5 and M6 were not available. Depending on how many of these faulty oil pumps that BMW has laying around, especially considering the fact that models from July to September could be included in the engine recall, the company may be forced to have a new batch of engine oil pumps produced to replace all of the oil pumps in these affected vehicles. Owners are not happy about not being allowed to drive their $100k+ German sports cars but the length of time asked of owners and dealerships who cannot sell these models is likely due to the automaker’s move to have the replacement oil pumps produced.

This stop sale/recall process for the 2013 BMW M5 Sedan, M6 Coupe and M6 Convertible is surely a very frustrating experience for the owners but the company has acted quickly upon finding out about the potential problem. While enthusiast reports indicate that there have been some engine failures, the automaker has made the move to fix the problem ahead of widespread engine failure reports of their amazing high performance M models.

Tesla Contemplates A New Strategy for China Retail even As Sales Boom
Jay Leno on Elon Musk & EVs: “I Think He Should Get ... Credit"
END_OF_DOCUMENT_TOKEN_TO_BE_REPLACED