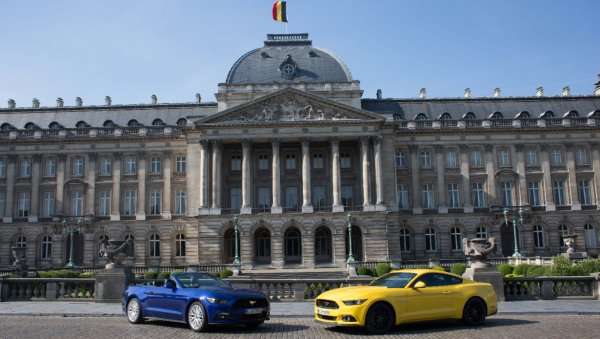 Belgium Loves the Ford Mustang More than Any European Market

The Ford Mustang has proven to incredibly popular in a variety of European countries, but relative to the number of drivers in the country, no country rivals the Mustang enthusiasm of those buyers in Belgium – where the new pony car is proportionally more popular than it is in anywhere else in Europe.
Advertisement

The 2015 and newer Ford Mustang is the first in the 50+ year of the fabled American performance car to be marketed on a global level – and markets around the globe have responded very well to the availability of the Mustang at their local Ford dealership. The Mustang has proven to be the most popular sporty 2-door car in Germany, Great Britain and Australia, with the European market as a whole happily embracing the newest American pony car. To some Europeans, American muscle cars are brutish, excessive machines which are only good for going fast in a straight line and while that may have been true in the past, the new Mustang is a great handling vehicle. This shift to improved handling has paid off, as multiple markets outside of North America have made the Mustang their favorite sports car.

Germany and Great Britain get the most attention in relation to Ford Mustang sales because both of those markets have a proud heritage of homegrown performance cars. They are also large countries with a high number of drivers, leading to Germany and Britain combining to account for more than half of all new Mustangs sold in Europe, but based on the number of drivers – Germany and Britain actually trail Belgium in terms of Ford Mustang popularity.

Belgians Love the Mustang
Since the new Ford Mustang went on sale, the Motor Company has shipped around 21,000 pony cars to Europe, with 7,281 going to Germany and 4,761 going to Britain. Ford sold “only” around 1,600 new Mustangs in Belgium, but when you look at the number of drivers in these three European countries – a far higher ratio of Belgians have bought the new Ford Mustang.

In short, while Belgium doesn’t account for the same volume of Ford Mustang sales as the larger European countries like Germany and Great Britain, it is more popular per capita with Belgian buyers than with other markets around the continent.

Mustang Rules in the USA
Ford’s announcement with the popularity numbers for the European market didn’t mention the United States, so I did some hunting around and did the math for Mustang popularity here in the USA.

Based on Federal Highway Administration information, there were around 210 million drivers in the US in 2009, with around 685 out of every 1,000 US residents being licensed to drive. Unofficial numbers (which reference that official 2009 number) state that there were around 216 million licensed drivers in the US in 2015 and in 2015, Ford sold 122,349 Mustangs on home soil. 122,349 Mustangs across 216 leads to a ratio of one Ford Mustang for every 1,765 people.

For comparison, the Ford F Series pickup is the bestselling vehicle in America with 780,354 units sold last year. Based on 216 million drivers, that is one new Ford full size truck sold for every 277 people.

Right now, the Ford Mustang has the title for America’s most popular sports car locked up for 2016 and based on the early results from Europe, Australia and other key global markets – the Mustang will almost certainly be the bestselling sporty car in the world.