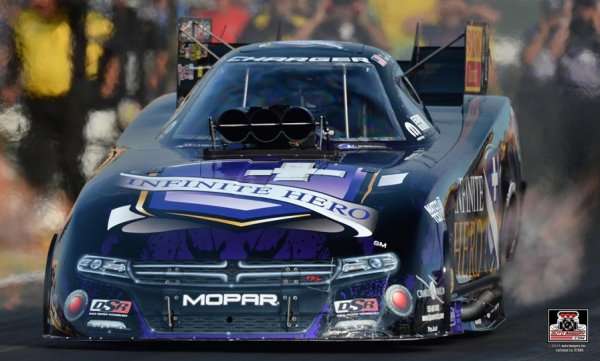 While the Dodge Charger teams weren’t able to tie down their 14th win in the 17 races this season this past weekend in Brainerd, Jack Beckman and Matt Hagan were both able to lay down record-setting runs with their Hemi powered funny cars while also extending their lead in the season standings.
Advertisement

The 2015 Mello Yello Funny Car class has been dominated by the 2015 Dodge Charger teams of Don Schumacher Racing. Coming into the Brainerd event this past weekend, DSR Chargers had won 13 of the first 16 events of the season, smashing funny car records all along the way. With this in mind, the Dodge Charger drivers of Ron Capps, Tommy Johnson Jr, Matt Hagan and Jack Beckman were early favorites coming into the 17th event of the season.

Unfortunately for Mopar fans, the 2015 Dodge Charger funny car didn’t take the big win, but the Don Schumacher teams still had a strong showing, setting a few records and extending the season championship lead while settling for a rare runner-up position in the final race of the weekend.

Mopars Quick from the Start
Once again, “Fast Jack” Beckman came out of the starting gate with the intentions of being the quickest car in the funny car class. Although Robert Hight and his Chevrolet Camaro were the first to get into the 3 second range in Brainerd, Beckman and his 2015 Charger set the pace in the first round of qualifying. Fast Jack laid down a 3.976 at 319.90 miles per hour to be the quickest (ET) and fastest (MPH) funny car in the field, while the rest of the DSR Dodge cars were further back after their first run.

In round 2, Tommy Johnson Jr ran a 3.974 to join the Brainerd 3 second club, as did Matt Hagan and Toyota driver Chad Head, but Beckman showed that he was the top dog with a 3.946 at 324.756 – making him once again the quickest and fastest car in the field.

Things got really interesting in the third and final round of qualifying, with John Force, Del Worsham, Alexis DeJoria running in the 3 second range, but Fast Jack lived up to his name – once again turning a record pass with a 3.901 at 325.69mph. That was the quickest (ET) and fastest (MPH) run by an NHRA funny car on the modern track, ever.

More Records Fall in Eliminations
After setting all sorts of records in the first round, the Don Schumacher Dodge Charger teams had more in store for the elimination rounds. Beckman had an easy pass when his opponent ran into issues early in the run, but for Matt Hagan – round 1 of eliminations at Brainerd was the kind of run that will go into his career notes.

Hagan and his 2015 Dodge Charger ran a stunning 3.879 at 329.58 miles per hour, making him the first funny car driver to break into the 3.8 second range while also setting a record for the highest trap speed. Hagan would back up that MPH record in the next round when he lost to Jack Beckman, who ran a stunning 3.903 to back up his new ET record.

Unfortunately for the Dodge teams, records and points were the only bright points this past weekend, as Beckman would lose in the third round to Tommy Johnson Jr, who would then lose in the finals to the Camaro of Robert Hight. However, Beckman, Hagan and Johnson were able to extend their points lead in the championship run while also securing their place in the Countdown to the Championship events starting in a few weeks. Ron Capps is in 6th place overall, but he has also locked in his place for the championship battle, as have John Force and Del Worsham.

The final 4 spots in the 2015 Mello Yello drag racing series funny car class will be decided in two weeks when the teams get to Indianapolis for the last event of the “regular season”.