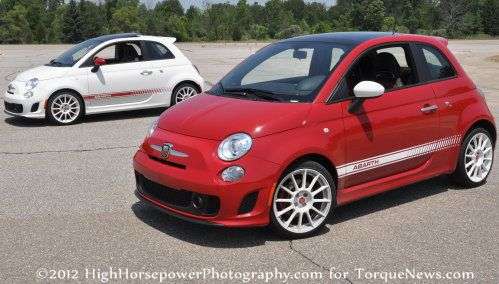 August 2012 was a good month for the Chrysler Group with an improvement of 14% marking the 29th consecutive month of year over year gains thanks to all five of the Group brands posting positive gains – helping the smallest of the Detroit automakers to post its best August since 2007 while leading the Big 3 in sales growth.
Advertisement

Even though the Fiat brand is currently comprised of just three different trimlines of the same model, the sporty little Fiat 500 continues to grow in popularity and August 2012 proved to be the best month yet since Fiat rejoined the US market. The brand sold 4,150 Fiat 500 coupes, convertibles and high performance Abarth models last month, accounting for an improvement of 34% over the same month in 2011. We can expect to see things continue for the Fiat brand as the introduction of the 2013 500 Turbo brings greater performance to the lineup – bridging the gap between the standard Fiat 500 and the mighty 500 Abarth.

The Chrysler brand was next in line in terms of year over year sales growth with an increase of 25% over the same month last year. The luxury brand of the Chrysler Group that shares the company name was led in growth by the range topping Chrysler 300 sedan with a jump of 65%. The Chrysler Town & Country minivan was second in growth with an increase of 30% and the midsized Chrysler 200 showed growth of 10% to round out the brand although with 11,997 units sold – the Chrysler 200 was the strongest model in terms of sale volume. The Town & Country was second in sales with 11,405 units sold and the 300 was third with 4,668 full sized sedans sold last month.

The hard working Ram Truck brand ranked third in Chrysler Group company growth with an increase of 18% in August 2012. The Ram pickup family was the brand leader in terms of both sales volume and growth with 25,515 trucks accounting for an increase of 19% compared to one year earlier. The Ram Cargo Van that is based on the Dodge Grand Caravan had another great month with 848 units sold and the out-of-production midsized pickup formerly known as the Dodge Dakota moved just 2 units. The Ram Truck brand can expect to see more growth thanks to the introduction of the new, more power and more fuel efficient 2013 Ram 1500 lineup.

The Dodge brand was the fourth best brand from the Chrysler Group in sales growth with a jump of 13% but more importantly – with 47,348 cars, vans and SUVs making Dodge the bestselling brand within the group for August. The Dodge Journey was the brand’s top performer in terms of growth with an improvement of 58%; followed by the Grand Caravan lineup at 35% and the full sized Charger with an increase of 30%. In terms of sales volume, the Dodge Grand Caravan posted a comfortable lead through the month with 16,428 minivans sold while the Charger was second (7,973) and the Journey was third (7,922). The most important bit of information for August 2012 from Dodge is that the new 2013 Dodge Dart sold 3,045 units in just its third month of existence. The consumer market has been quick to accept the new compact sedan and that could lead to bigger numbers in the future – especially with the introduction of the performance oriented R/T and the super fuel efficient Aero models later this year.

The “worst” brand from the Chrysler Group was the Jeep brand but it is a sign of a good month when the “worst” brand still posts an improvement of 5% over the same month in 2011. The Jeep Liberty was the top dog in growth with a jump of 15% while the Grand Cherokee was second with 13% and the Wrangler was third with a 3% increase. In terms of sales volume, with 13,293 the Jeep Wrangler edged out the Grand Cherokee, which sold 12,848 units in August 2012.

The Chrysler Group has posted 29 consecutive months with a year over year gain, which means that for the past two years and five months, the month in question has shown positive growth over that same month the year before. The continued unveiling of new, impressive products and the gradual improvement of the industry of a whole has meant good things for the Chrysler Group and with the new Dodge Dart being joined by more new models in the coming year – Chrysler could continue that streak into the 2013 calendar year.